Toddler dances through an intricate Sand Mandala built over two days at Union Station by monks.

Kansas City, Kansas (USA) -- The Tibetan monks found their sand mandala in disarray after a youngster danced across it. 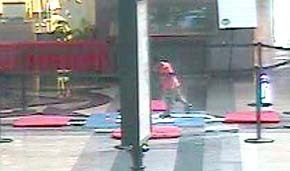 Talk about a test of faith.

Eight Tibetan monks spent two days cross-legged on the floor at Union Station, leaning over to meticulously create an intricate design of colored sand as an expression of their Buddhist faith. They were more than halfway done.

And then, within seconds, their work was destroyed by a toddler.

Monks are bald, so they couldn’t rip their hair out. But were they angry? Did they curse? No. They simply smiled and started over.

“No problem,” said Geshe Lobsang Sumdup, leader of the group from the Drepung Gomang Monastery in southern India.

“We didn’t get despondent,” he said Wednesday through a translator. “We have three days more. So we will have to work harder.”

That the monks were able to shrug off their setback can be attributed to their religion. “It teaches us that nothing is permanent,” said Staci Olsen, a volunteer at the Rime Buddhist Center in Kansas City.

Sometime Tuesday after the monks had finished their labors for the day a woman with her small child visited the post office inside Union Station, near where the design was being created. The child, apparently attracted by the pretty colors, wandered over to play with it.

“He did a little tap dance on it, completely destroying it,” said Lama Chuck Stanford of the Rime center.

The mother did not report the incident, but a security camera at Union Station captured the moment. “She summarily picked the child up and boogied,” said Bob Smock, security manager for the station.

The sand design was surrounded by stanchions, but the child simply went under the tape. Officials have said they now will place benches around the new creation to further protect it.

The design is called a mandala, and there are thousands of different patterns. The one these monks are working on represents Chenrezig, the bodhisattva of compassion.

Traditionally, monks create a mandala to mark the new year. To start, they put brightly colored sand into a metal funnel called a chakbu and rub it gently to distribute the sand. When they have finished the mandala they sweep up the sand and deposit it into a river.

These monks are on a yearlong tour of the United States and Canada to raise money for their monastery; the original in Tibet was destroyed by the Chinese. This is not the first time monks from the monastery have visited Kansas City and Union Station. On this trip, they will continue to work on the mandala today and Friday.

During a closing ceremony at 2 p.m. Saturday they will sweep up the sand and offer bits to onlookers to place in their gardens. The rest of the sand will be placed in the Missouri River.

“The belief is that it will carry the blessings all over the planet, from the Missouri River to the Mississippi to the gulf and to all the oceans of the world,” Stanford said.

Jampa Tenzin, one of the monks who can speak a little English, said this was the first time on this tour a mandala in progress had been destroyed. But the monks know the child was innocent.

“They have meditated so long they have developed this equanimity,” Stanford said. “Regardless of what happens — if a kid dances on your sand mandala — it’s OK. If everybody in the world had that kind of stability of mind we’d be better off.”