Zen and the Art of Volvo Maintenance

Boulder, CO (USA) -- WHAT is the sound, asks an ancient Buddhist koan, of one man driving? In my case, for more than 1,500 miles, the answer was a low-frequency whine emanating from my front wheels. The bearings were seizing up, and the Volvo, which had never moved quickly, lurched forward with ever-greater reluctance. 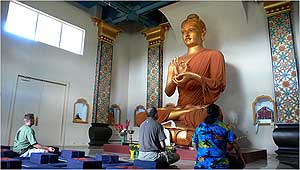 << Meditating before the seated Buddha inside the Great Stupa.
Matt Gross for The New York Times

The offering bowl outside is the Great Stupa is a place for Buddhists to symbolically shed their attachments.

As I headed north toward Colorado, I began to have visions of my wheels suddenly detaching on a narrow pass in the Rocky Mountains. So I checked the car into the Santa Fe Mazda Volvo (2704 Cerillos Road, 505-471-6700; www.santafecars.com) and spent $454 — three-quarters of which were labor costs — to get the bearings replaced.

A good thing, too, because up in the Rockies I needed full control of my vehicle. From the high-desert plateau of San Luis to the steep roads snaking through Breckenridge, from the hip-high thickets of golden grasses bowing under the gusty winds to the stands of pines and aspens crowding the hills, I kept both hands on the wheel. It rained, the sun came out, then it rained again, and eventually, the sun sank into the west — and I was still driving.

More than 12 hours after I left Santa Fe, I was creeping down a dirt road in Red Feather Lakes, in northern Colorado, when I finally spotted the Shambhala Mountain Center (4921 County Road 68-C, 970-881-2184; www.shambhalamountain.org), the Tibetan Buddhist retreat where I planned to spend a few days pondering the last 10 weeks of frugal wanderings. My stay in a green canvas tent would cost a hefty $79 a night, but that included three meals a day, yoga classes and occasional spiritual guidance.

But at midnight, the registration office was closed, and it wasn’t clear where I was supposed to go. Then my headlamps flashed on four young people with shaggy haircuts, yoga-lithe bodies and artistically filthy T-shirts. They were Shambhala staffers, and they offered to help me find a place to sleep. We set off toward the tents, the white ribbon of the Milky Way glowing above us.

“How’s the dharma in Brooklyn?” asked a 19-year-old who introduced herself as “Cara or Sky.”

Huh? I stammered something about not having been in the borough lately, but it was obvious I was out of my depth, that I didn’t speak the same language. Did I have a practice, they asked? Had I studied Shambhala? Had I ever meditated?

No, no, no. Though frugal travel has required me to embrace certain Buddhist conventions — shedding attachments to luxuries, for example — the closest I’d ever come to spiritual enlightenment was drinking bourbon from a silver Tibetan flask I bought in India.

Cara (or Sky) and her bed-headed friend, Justin, decided to begin my spiritual training right away, and escorted me to a small, stuffy shrine room for a beginner’s lesson in meditation. Sitting cross-legged on a cushion, I was instructed to put my palms down on my knees, keep my eyes open and concentrate on breathing (a necessity at an altitude of almost 8,000 feet).

“If you have a thought,” Justin said, “just tag it ‘thought.’ Don’t label it ‘good thought’ or ‘bad thought’ — just ‘thought.’ ” Then Cara tapped a bronze bowl with a mallet, and the sound resonated through the space, fading but never quite vanishing. Meditation had begun.

Or at least, it had for them. I was confused: How could my thoughts be bad? I tried to label this confusion “thought,” but it persisted, and my eyelids grew heavy. Then Cara rang the bowl again. Ten minutes had passed in an instant.

Justin and Cara led me through the blacked-out scenery to an empty tent, and before I unrolled my sleeping bag, I asked Cara what people did at Shambhala.

“Mostly,” she said, “we just hang around, meditate, and walk in the woods — and get boozed.”

The next morning, I stumbled out of my tent and finally saw where I was. Shambhala’s 600 acres are in a vast valley surrounded by craggy, evergreen-thatched ridges. Deer nibbled leaves on the paths, unafraid of the 400-plus staffers and students, and chipmunks scurried around, their tails nearly vertical in the air. In the center of Shambhala was “downtown,” a collection of offices, meeting tents and picnic tables where most of the hanging out is done — and where I learned about the movement’s history.

Founded by the late Chogyam Trungpa Rinpoche, a lama who fled Tibet when China invaded in 1959, Shambhala attempts to adapt Tibetan Buddhism to Western culture. Many of its concepts are common to all strains of Buddhism, but Shambhala adds an emphasis on community development. Keeping one’s eyes open during meditation, for example, maintains contact with fellow practitioners, and students on official programs have to share chores like cleaning bathrooms or washing dishes.

Unattached to a program, I was free to do as I liked, so I marched up to the Great Stupa of Dharmakaya to meditate. The stupa, built to house Trungpa Rinpoche’s ashes, is an amazing sight amid the rough Rockies: a gleaming white tower, wide at its base and narrowing — through ziggurat-like steps, an urn-shaped trunk and a 15-foot bronze Buddha — to a golden pinnacle. Inside, a massive seated Buddha presides over a multicolored marble floor, intricately carved tile columns and a framed photo of the Dalai Lama.

There I sat in meditation, breathing carefully and remembering that the last time I’d used my diaphragm this intentionally was during my trip around-the-world last summer, in yoga exercises with Kemal Gorgun, a Turkish apple farmer.

Then a question appeared before me: What am I seeking? It was a question that nagged me many times before — both from myself and from others — and it hit me now with a new force. Apart from bargains and good times, what was the larger point to this long journey that would end in about two weeks? What did this road trip all amount to, besides a few money-saving tips and shallow insights into American life? 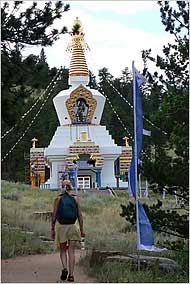 A visitor approaches the Great Stupa of Dharmakaya (Which Liberates Upon Seeing).
Matt Gross for The New York Times  >>

I gasped — I’d forgotten to breathe — and walked out of the stupa, desperately hungry not just for meaning but for lunch. At the mess tent, I got a plate of grilled chicken and corn-and-tomato salad, and gobbled it down, trying to fill some emptiness inside. Then I sought out Sonja Geoghegan, a meditation instructor from Ireland, who told me to keep meditating.

No kidding. Restlessness had defined my summer. So I went hiking in the mountains, and wandered around and around the land, blowing simple tunes on my harmonica and hoping to tire myself out enough that I could sit and do nothing else.

It worked, but only temporarily. I would sit — in the Great Stupa, in the staff shrine room, on a boulder in the sun — but soon I’d feel the need to move on, to explore the valley and meet new people, to do in microcosm what I’d been doing across America in my Volvo.

At the same time, I began to notice a spiritual gulf between myself and the Shambhalans, who were all there for truer, purer purposes. Many told stories of careers or lives that had fallen apart, and of how Buddhism had rescued them, and I felt ashamed that I was there for no greater reason than curiosity. I could offer them nothing, it seemed, and vice versa.

Over the next few days, I started to draw myself away from this community, eating quickly and alone, reading Vikram Chandra’s gangster novel “Sacred Games,” and going for longer walks in the woods, troubled not just by the questions I’d asked myself but by the fact that I was troubled at all. Why, I wondered, should any of this bother me? Why did I need an answer to the question? Couldn’t I just keep on keeping on?

At mealtimes, I’d look around at the people I’d met — Cara, Justin, a blogger named Monica (www.nebuddhist.blogspot.com), a wiry skeptic named Chris, a yoga student named Noella — and could hardly recall our conversations. All summer long, I’d been making friends and leaving them behind, and it seemed pointless now to deepen any connections.

My last evening at Shambhala began badly. I ate dinner by myself and continued reading “Sacred Games” at the central picnic tables. No one spoke to me, and when it got too dark to read, I just sat there, thinking and waiting for the sky to blacken enough for the stars to come out. I wanted to see the Milky Way one last time before leaving the mountains.

Alex Palecek, 26, was a newly arrived staffer with a blond mustache. We began to talk, and in a very short span of time, our conversation ranged over from Kierkegaard and Socrates to linguistics and Buddhism. I don’t know if I’d been holding back before, but suddenly I had a million things to say, and for the first time I talked about the questions that had been hounding me.

Alex understood — and better, he absolved me of the guilt I’d been feeling for detaching myself from Shambhala. Maybe, he suggested, I’d already learned what Buddhists learn about impermanence, but through other channels. Maybe Shambhala wasn’t what I needed.

Then Cara/Sky happened by and invited me out to a bar in the town of Red Feather Lakes with a bunch of other staffers. I smiled and said yes, and before I went hunting for my car keys, I shared with Alex one last theory about my existential crisis. Maybe “What am I seeking?” wasn’t a question, but an answer.

“That’s exactly what came to my mind,” he said.