Locals tune into iMonk for enlightenment

Vail, Colorado (USA) -- Up past the gates of Cordillera, on a ridge with sweeping views of the neighborhood, in the basement of a large, immaculately kept home, is where they seek awakening. 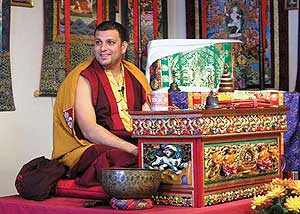 To the other side is a plush sofa where they sit and kneel.

The centerpiece of this sangha, or congregation, is a big flat-screen TV that looks like it could show amazing screenings of, say, Spider-Man 3.

But Jeannine Hallenbeck, the home’s resident, has not installed this home theater for movies. It is the pulpit of the venerable Tenzin L.S. Priyadarshi.

The TV has a Web cam on top of it, and it is connected to a laptop. A speakerphone sits on the coffee table. With all of this equipment, the sangha connects to Boston, where Priyardarshi is a visiting scholar and Buddhist chaplain at the Massachusetts Institute of Technology.

Residents from all over the valley come to this basement living room to hear the monk lead meditation sessions and teach Buddhism as a program of a Salida-based nonprofit called Bodhimarga.

They meet every Thursday in the Cordillera home, welcoming anyone who is interested in Buddhism, from newcomers to experienced practitioners.

Walt Bujaryn, the group’s tech guru, was setting up the video feed with Hallenbeck before the session Thursday. Bujaryn and Hallenbeck tried to give a visitor a five-minute primer on Buddhism. The group studies Tibetan Buddhism.

“It’s about getting in touch with your own Buddha nature, which is compassion and wisdom,” said Hallenbeck, who started studying Buddhism when she faced an illness a few years ago.

“You become one with your world, and it teaches you and tells you,” said Bujaryn, who considers himself more of a student of Zen Buddhism and got to know Buddhism while living with monks in England in the ’70s.

A visitor asked how long it takes to reach the ultimate goal — enlightenment.
Hallenbeck laughed. It could take a lifetime, she said, or it could take many lifetimes.
Three others arrived, and it was time to start the session.

The venerable Priyardarshi appeared on the big-screen TV, sitting at a desk in a small room, wearing a yellow, sleeveless shirt and a headset.

The screen flashed to the other groups that had tuned in with the monk: groups of people in Denver, Buena Vista, Salida and Winter Park. They stared into the camera, some in living rooms, others in community rooms.

Hallenbeck passed around blue booklets containing chants, which they read in unison, in Tibetan and English, with the venerable Priyardarshi:

In the Buddha, the Dharma and the noblest sangha
I take refuge until enlightenment is obtained.
By the merit of generosity and so forth
May I attain buddhahood for the welfare of all beings.

After chants and a long moment of meditation, the monk began his teaching. He talked about the importance of interaction with others in one’s spiritual development. That interaction will help one hone his or her own compassion and wisdom, he said.

Following the end of the lesson, the disciples asked questions. Hallenbeck said she’d seen a disturbingly violent movie and had trouble watching it. Does awareness mean one must watch such violence?

As the monk began to answer the question, Hallenbeck accidentally disconnected him, and the sangha had to frantically redial him. When they had him back, Hallenbeck asked him to repeat the answer, which the venerable Priyardarshi dutifully did.

Denying the existence of violence is not good, he said.

“Denial is something you cannot do forever in a conscious state,” he said.

At the same time, he said, one can find enough violence in the world without watching gratuitously violent movies.

His students at MIT call Tenzin the iMonk. Not only does he link in via video to students across the world, his podcast are on the Web, and he’s available to his students in Colorado by e-mail. (He also has a degree in physics.)

The video session ended with the group discussing their upcoming retreat to Vail. Tenzin will be in Eagle County this weekend, leading meditation, lectures and discussions. He will give a free public talk Friday at the Beaver Creek Chapel. The monk comes to Colorado about once a month to teach his students in person.

The feed ended, and the group dispersed, saying their good-byes and walking up the stairs and out the door.