For Many a Follower, Sacred Ground in Colorado

Crestone, CO (USA) -- “TRUST an unknown future with a known God,” urges the sign in front of the Sangre de Cristo Christian Church on the outskirts of Crestone, Colo., which is close to a four-hour drive south of Denver off Highway 17. The town might seem to be in the middle of nowhere, but if you’re seeking a taste of the divine, you’ve probably come to the right place. 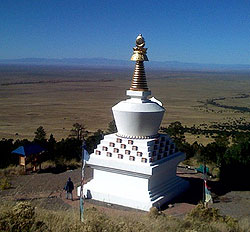 At 8,000 feet on the edge of the desert plains of the San Luis Valley beneath the Sangre de Cristo Range, this town and its environs have about 1,500 residents and two dozen different religious centers, including a cluster of Buddhist monasteries, a Catholic monastery, a Taoist retreat, a Hindu ashram, a Shumei center and several American Indian sanctuaries. This forested hillside haven, nestled on an enormous aquifer below the 14,000-foot Crestone Peaks, has long been considered sacred.

“The Navajo and Hopi think of this as holy ground,” said John Milton, a naturalist who runs shamanic Indian workshops on the serene 210-acre Sacred Land Trust along North Crestone Creek. “Elders from the community still come here to worship.”

An abundance of arrowheads and spears found in the area indicate that Crestone has long been a gathering spot for Indians. “This area was probably considered holy thousands of years before Europeans ever set foot here,” Mr. Milton said.

It’s easy to see why. There’s an epic quality to these crags that rise out of the plains like ghost cathedrals of fantastic proportions. Deserts, forests and mountains figure so prominently in humanity’s quests for the divine that Crestone’s geographic hat trick seems ideal for universal worship.

But this is rugged and lonely high country that imposes a certain discipline on its visitors that doesn’t exist in the gentler landscapes and climes of other American spiritual centers.

“Places like Sedona and Santa Fe are full of healers and seekers who change what they seek every week,” said the local Zen abbot, Richard Baker Roshi, a fixture of the Beat scene in the 1960s and a major figure in introducing Zen Buddhism to the United States. “This has less distractions. Those who come here tend to be more directed in what they seek.”

And the number of those seekers has been growing by 15 to 20 percent a year for the last five years, local residents and real estate agents say. Some become permanent members of the community, others buy second homes (bungalows can still be had for under $100,000) and some are spiritual tourists. 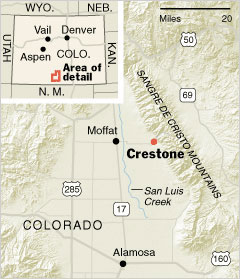 Maybe the lure is in the twilight. At dusk, the setting sun gives the Sangre de Cristo Mountains — Spanish for “Blood of Christ” — an ethereally red hue. Standing at the 41-foot-high gold-tipped Tashi Gomang Stupa on a hillside overlooking the parched San Luis Valley transports you to Tibet, while looking up at the pine forests and snow-covered peaks from the Nada Hermitage, the Catholic monastery, brings to mind Northern Italy.

BUT Crestone itself, with its dozen ramshackle blocks of old miners’ buildings, leaves no doubt that you are indeed in the West — though the sight of Tibetan monks in flowing robes and aging hippies lugging Vedic tomes prompts the question: How far West?

“Throw a brick around here, and you’ll hit a psychic,” said Mark Elliott, a British filmmaker and Buddhist who has lived in Crestone for two decades. “When I first came here, it was practically a ghost town. I thought I would drop off the face of the earth. But Crestone has risen in the world since I’ve moved here, and I’m more connected to the worlds that interest me as a result.”

Crestone’s emergence as an international religious crossroads started in the 1970s when Maurice Strong, a Canadian power company tycoon and an international diplomat, acquired a controlling interest in the 200,000-acre Baca Ranch next to the town. While Mr. Strong’s wife, Hanne, was visiting the place, a local mystic named Glenn Anderson appeared at her doorstep.

“He was an old chap who had a lot of students in the valley,” Mrs. Strong said. “He came right up and announced, ‘I predicted in the ’60s that a foreigner would come here and build an international religious center here. What took you so long?’ ”

The Danish-born Mrs. Strong was inspired enough to start the Manitou Foundation, which allocates land grants and money for religious orders that want to set up in the area. Tibetan and Bhutanese Buddhists have been the largest beneficiaries, with a half-dozen Buddhist centers in Crestone.

“This is probably one of the most important sites for Tibetans,” said Mrs. Strong, a Buddhist who lives part time in Crestone. “This is where Tibetan culture will survive.”

The hyperkinetic Mrs. Strong is far from done: At least two new Buddhist centers are being built, a hospice is planned, and she is spearheading opposition to proposed drilling for natural gas through the aquifer.

Most of Crestone’s major religious centers are sheltered in the juniper and pine forests on the lower slopes of the mountains south of town, along a murderously rutted dirt road called Camino Baca Grande, nicknamed the Holy Way. Signs and prayer flags point the way to temples and monasteries where visitors can explore a worldwide diversity of holy architecture and gardens. Many of the centers offer tours and overnight retreats for individuals and families.

One morning, having been invited by Baker Roshi to attend the 6 a.m. meditation at the Mountain Zen Center, I arose before dawn, wrestled the Holy Way to retain my kidneys, and was quietly let in the temple’s back door. I joined a group of a dozen monks and novices in a walking meditation — slow-motion steps synchronized with deep breathing punctuated by brisk walks along the temple’s outside gallery.

At first, it seemed awkward, but by the time the sun’s first rays had caught the surrounding peaks, I had fallen in line with both the communal intimacy and internalized concentration of the exercise. But a harder test waited: the 40-minute zazen meditation, sitting in lotus position facing the wall in the dim temple.

Any doubt about the discipline of being a Zen practitioner slowly, very slowly, evaporated as first one foot and then another fell asleep. I peeked at my watch 20 minutes into the meditation and the rustling of my sleeves seemed to reverberate in the silent hall. Must ... not ... move. As my thoughts and visions concentrated, the discomfort evaporated. By the time I re-emerged into a fully lit Rocky Mountain morning, I felt extraordinarily refreshed.

“Zen Buddhism is a gateway to the wilderness, so this place is very conducive to that,” Baker Roshi told me, walking me back to my car as monks scurried about, tending to their morning duties. He also shared his thoughts on Heisenberg’s uncertainty principle, gardening and car transmissions. In Crestone, the sacred and profane seem effortlessly intertwined in daily conversation and activity.

Take firefighting. “The first thing I do when I see a fire is to greet it to let it know that I’m going to be present,” said Peter May, one of the area’s fire chiefs, who, as a practicing Buddhist, believes in the interconnected harmony of all elements. One of Mr. May’s jobs is to oversee the half-dozen outdoor cremations that occur in Crestone each year.

“If you can recognize the relationship between yourself and the elements,” he said, “you’d be surprised what can happen.” Mr. May then recounted the time when a Tibetan lama interceded in a local fire by meditating for rain clouds, which eventually came.

TALK like this, which might raise an eyebrow or two back in a more secular world, seems quite normal after spending a few days in the Crestone area. An innate sense of sanctity can overwhelm even the most urban of souls in these rarefied heights. Hiking Crestone’s pine-scented mountain paths, soaking under Van Gogh-ish night skies in the Joyful Journey Hot Springs, or going from temple to temple like a super-pilgrim transcending traditional cultural and geographic boundaries gradually immerse a visitor in Crestone’s otherworldliness.

But this isn’t Aspen or Sedona chic. Those seeking high-thread-count inns, extravagant New Age knickknacks, easy listening metaphysics and great sushi will be disappointed. Crestone is devoid of five-star luxuries, or even a strong sense of commerce. There, paradise arrives at everyday low prices and things are kept simple: houses and cabins sometimes still sell for five figures, dinner checks are sometimes rounded down if you lack cash and locals crack a smile when newcomers lock car doors.

Not that Crestonians feed merely their souls. Walk into Curt’s Old Country Store and you will find yourself in a health-food emporium reminiscent of those found in big college towns, with offerings ranging from organic dog food to vegetarian jerky.

Next door, the town’s go-to cafe, Shambala, is a comfortably laid-back spread of parlors in a former miner’s home. “Unattended children will be given a double mocha and a puppy,” reads a sign next to the kitchen counter, where chai, juices and delicious organic fare are liberally doled out.

If all this health and spirituality leaves one feeling a bit too earnest, then Crestone has a wonderful antidote. Duck into the purple-painted Silver Crest Palace — the only bar in town — which at first glance could be a Wild West saloon with a poker game in the main gallery and lots of drinking and smoking (“only organic cigarettes,” a regular said) around the cherry wood bar. The easygoing attitude stems from the fact that the saloon becomes a private club several nights a week. When I was there the Crestone Yacht Club was in full session. Membership: 50 cents.

But ahoy! Monks, Wiccans, writers, artists, teachers, cowgirls and cowboys were among the crowd debating, playing poker, exchanging books, hitting on each other and occasionally throwing a buck into the tip jar to finance the bartender’s pilgrimage to Peru. This unusually sociable place functioned less as a bar and more as town pub with a metaphysical bent. The great religious and cultural crossover of the Holy Way continued there, loosened by smoke, booze, flirting and a laid-back sense of fun.

Perhaps Crestone was just revealing yet another of its seemingly countless paths to paradise.