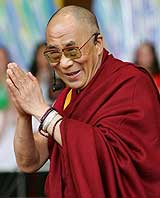 << The Dalai Lama at Aspen, Colorado

Buddhist monks hovered over the mandala, adding to the swirling patterns of yellow, green, red and white. Clouds and whorls and geometric shapes took form as the monks clad in maroon and saffron drizzled tiny lines of sand onto the form in front of them.

The mandala is a sort of sacred world in miniature, an idealized place that only exists in sand. By the end of the weekend, it was beautiful, then gone. With chanting and ceremony, the monks swept away the sand and poured it into the waters coursing
through the Aspen Institute grounds.

This imaginary world of perfection was to flow into the Roaring Fork, then the Colorado, then the ocean.

It’s a little heartbreaking to see such a beautiful work of art, which took so long to create, dumped into the creek. But it’s not just about that Buddhist sense of impermanence. Pouring the mandala into the water is the ultimate end. All that work seemed like it was about making a pretty picture, but it was actually about making a better world.

The Aspen Institute’s symposium was a sort of mandala in its own way. It was brief, beautiful and impermanent, and if it works, it’s supposed to make the world a better place. At the center of all the talks and seminars and exhibits sat the Dalai Lama, the revered head of Tibetan Buddhism and a religious leader of rock star status. The Dalai Lama spoke twice in Aspen, his legs folded underneath him on an oversized chair, first to a crowd of symposium attendees, then to a crowd of over 3,000 filling the Benedict Music Tent and spilling over onto the lawn.

People often leave events with the Dalai Lama feeling either recharged or disappointed. I spoke to people afterwards who felt both ways. As for me, I’ll take the Buddhist middle path. Maybe it’s time we take the Dalai Lama at his words. He’s just a simple Buddhist monk, but one with a lot to offer an ailing world.

For those who attended the seminar, plenty of other simple Buddhist monks were walking around, either dispensing wisdom or being the living embodiments of the tenets of simplicity and compassion.

OK. It could be a fortune cookie, or a quote from Yoda. But when the Dalai Lama says it, he means it, to a deeper degree than we can easily understand. It explains why he doesn’t demonize China, even though the country has oppressed his people and forced him and many others to flee.

Like the sands from that mandala floating out to sea, the Dalai Lama calls the world his home. In his talk on Friday, he joked, but probably only half joked, that he wants to retire from his role as Tibetan and instead wants to tackle world peace and religious harmony instead.

Simple Buddhist monk? You wouldn’t know it from all the fawning that surrounded him, from the last-minute meeting with John McCain in the West End to the coterie of security guards that surrounded him and whisked him away into a motorcade of Land Rovers.

A crowd gathered outside his hotel room for hours waiting for him to be jetted out of Aspen on Saturday afternoon. Some held cameras. Some pressed their hands together in a quiet Buddhist sign of respect.

When he emerged, he acknowledged the crowd with blessings, smiles and waves, and when they asked him how he liked Aspen, he sent his security detail scurrying as he approached to answer. They are all about insulating him from the crowd. He is all about touching them.

It reminded him of the Tibetan home he fled as a child, he told the crowd.

“Very beautiful,” he said. “Mountains all over the place.”

The Dalai Lama stepped into the appointed black sedan and waved as the motorcade wheeled away.

Before he left, though, he blessed the mandala. When the monks swept away that ornate masterpiece into a pile of sand, they swept his blessings with it, and poured them into the creek, and into the world.