Tamarack, Montana (USA) -- Ewam Sang-ngag Ling in Arlee will be holding its fourth annual Festival of Peace on Sunday, September 7. 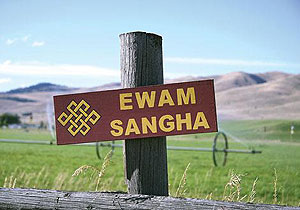 << Ewan Sang-ngag Ling is an Arlee Buddhist center and garden that is holding a festival of peace this week.

The center, Ewam for short, is the result of a dream that a nine-year old boy had, according to long time student of the center Diane Syester. The boy was no ordinary boy, though.

He was Gochen Tulku Sang-ngag Rinpoche. In the Tibetan language, a tulku is a great practitioner of Buddhism that "intentionally takes rebirth to lead others to enlightenment," according to Ewam's Web-site. Young Rinpoche had a dream that he would one day come to America and establish a garden.

Many years later, in the year 2000, when he was visiting a long time student in St. Ignatius, he saw Arlee and recognized it as the place he saw in his dream. An anonymous donor made a gift of 60-acres north of Arlee and the garden and center came into being.

Unique in North America, the center will draw Buddhist pilgrims from around the world when it is complete said Syester. Expected to be completed in 2012, the garden will be consecrated and blessed by the Dalai Lama she said.

The center holds a festival as a way to promote peace and end suffering throughout the world, said Syester. While it is held at a Buddhist facility, Syester stresses that it's a non-denominational event. There will be music of several types, including singing by a Tibetan nun named Tsering Wangmo and blue grass by local musicians. There will be speakers, including Rinpoche and local man Steven Smallsalmon. Children will be able to make musical instruments in a special children's tent.

"The purpose of the festival is to have an opportunity for the community to come together," said Syester. "And share their intention for peace and hope that suffering of beings will come to an end."