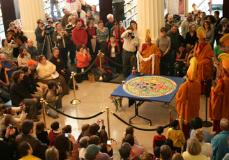 << The Kansas City community came together to witness the finished Sand mandala of the Buddhist tradition.
Media Credit: Kevin Bryce

Buddhist monks from the Drepung Gomang Monastery in India visited Kansas City, and the culminating event was the weeklong creation of an ancient Buddhist artistic ritual.

A crowd of more than a hundred gathered at Kansas City Public Library - Central Branch to witness the closing ceremony for the Buddhist ritual of the sand mandala.

The mandala is an ancient art form constructed only of colored sand. The image is extremely intricate, using millions of grains of sand, and took hours for the monks to create.

According to Buddhist tradition, the mandala forms a three-dimensional representation of the world in its divine form, which also serves as a map toward enlightenment.

Last Saturday, the monks performed a ceremonial chant to honor the creation, and then symbolically destroyed the mandala by brushing it into a small pile of colored sand.

The sand mandala, they explained, served two purposes: one temporary and the other long term.

Temporarily, the monks hope that whoever looks at the Mandala will gain understanding, peace and happiness.

Creating the sand mandala is also a practice of morality, ethics and unity that will stay with the monks and spectators even after the artwork is destroyed.

By destroying their sand mandala, the monks explained that it is a reflection of one's life. It is a reminder of our own existence and eventual demise.

It can be extremely difficult to grow, mature and build our own understanding, but at the same time, it is very easy to destroy all that we have created.

The monks took the sand from the mandala and put it in the Missouri river, sending a blessing everywhere the river goes.
TOP