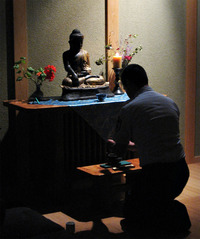 After a controversy over religious intolerance during the summer of 2005, the chapel was built in the basement of the academy's iconic Cadet Chapel.

In 2005, conservative evangelical Christians were accused of trying to force their religion on others. According to current and recently graduated cadets, the religious climate has improved substantially since then.

The controversy prompted the Air Force to issue guidelines for religious expression. The military also has made efforts to accommodate all faiths. These include the construction of the 300-square-foot Buddhist chapel at the Air Force Academy paid for by the Frederick P. Lenz Foundation for American Buddhism.

The floor is bamboo, and the walls are Port Orford cedar. The focal point is a cherry and ash altar with a Burmese Buddha statue on top.

During services, which are held Wednesday evenings, about half of the 18 pillows on the floor are usually occupied.

Tanner Faulkner, an 18-year-old student attending the prep school at the academy, says he feels encouraged to explore his religious curiosity.

"They let us know, 'We have this available for you, and it is possible for you to go to different services, whether you're Jewish faith or Buddhist or Christian or whatever,' " Faulkner says.

Sophomore cadet Dan Dwyer says his fellow cadets seem to have respect for his religion.

"People wonder where I go every Wednesday," Dwyer says. "I tell them I go to the Buddhist service, and it's just more of a curiosity rather than judgment."

Out of 1.4 million people in the military, 5,287 identified themselves as Buddhists as of June 2009. For these folks, questions inevitably arise about whether Buddhism — a pacifist religion — is even compatible with military service.

Sarah Bender is the Buddhist program leader at the Air Force Academy. She says she has plenty of questions herself about whether it's ever right to kill in order to stop further harm. But, Bender says, she leaves the academy every Wednesday evening feeling like this is where she's supposed to be.

"People in the military come up — for real — against questions that most of us just consider abstractly," Bender says. "The questions of Buddhism are the questions of life and death. So, where else would you want Buddhism than right there where those questions are most vivid?"

Bender says the academy is now a place where cadets and staff are free to practice any religion they choose.