Arlee, Montana (USA) -- One day soon, the Dalai Lama will bless the 1,000 Buddhas currently being forged for the Ewam Buddhist Center near Arlee. 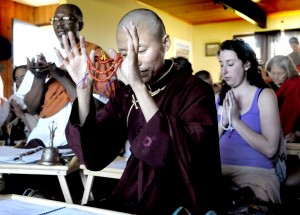 << Ani Tsering Wangmo, a Tibetan-born Buddhist nun, leads chants Tuesday evening at the Ewam Buddhist Center near Arlee. The Tuesday evening prayers are a regular gathering at the center, but part of the ceremony included celebrating the 75th birthday of the Dalai Lama. Photo by KURT WILSON/Missoulian

But on Tuesday evening, two very special guests of the center joined nearly 100 western Montanans - many of them Buddhist, some not - to give their birthday blessings to the Tibetan spiritual leader, who turned 75 on Tuesday.

Taking time out from their environmental work in Montana were Buddhist monks Amarbold Dondog of Mongolia and Tashi Galay of Bhutan, who are in the state on an exchange program fostered by the Tributary Fund based in Bozeman. The nonprofit group joins spiritual leaders of all traditions with environmental scientists, and works to inspire communitywide support for environmental protection wherever those leaders live.

Neither are monks from the Gelug sect of Tibetan Buddhism of which the Dalai Lama is spiritual leader, but both have deep admiration for his teachings and leadership.

"I have a lot of respect for the Dalai Lama," said Dondog, who works on environmental protection in Mongolia and is on his second trip to Montana. "I regard him as a symbol of peace in the world."

Galay also works for environmental protection in his home country, Bhutan, located in southern Asia and bordered by China and India.

Vajrayana Buddhism does not celebrate the Dalai Lama's birthday, he said. But Galay was happy to on Tuesday because "he is a towering intellectual and I respect him."

As do the others who assembled in the house located on the north end of the 60-acre Ewan Buddhist Center, which seeks to be a place of spiritual pilgrimage for people of all faiths - or none.

So how is the Dalai Lama's birthday celebrated?

With cake, of course. And lots of food, revelry, conversation, hugs. The celebration was preceded by a devotional of chants and meditation to the Green Tara, one of Buddhism's female deities.

No need to be Buddhist to grab piece of cake, or join in the devotional.

"Why not" join the celebration, said Louise Forrest, a Dalai Lama admirer who traveled from Bozeman to finally see the center she'd heard so much about. "What a great man he is."

Joining her on the trip was Deidre Combs, a conflict-resolution specialist and expert on world religions who also works with the Tributary Fund.

Combs is the author of "The Way of Conflict," which explores the common elements of peace and conflict resolution in all the world's faiths, both major and minor.

She has profound respect for the Dalai Lama.

"Anyone who can hold great joy and compassion for his enemies should be celebrated on his birthday," said Combs. "Talk about a man who knows about conflict and how to resolve it."

Both the visiting monks also worked a bit on helping forge one of the 1,000 Buddha statues that will soon find their home at the center, and will then be blessed by the Dalai Lama himself.

Already, hundreds of the 65-pound concrete creations have been made in the center's "Buddha barn" and in Missoula. But the work is proceeding at an especially frantic pace now that the Dalai Lama has accepted an invitation to bless the Garden of 1,000 Buddhas, once the statues and other projects are complete. The center hopes to finish them by the fall of 2011.

"There is a huge impetus to finish the garden now," said Luke Hanley, having just poured liquid cement into a mold, the first of many steps that will, weeks later, end up as a finished Buddha.

Hanley, the barn manager, first began work on the statues in 2006, but moved here from Park City, Utah, to work on them full time in January.

He became a Buddhist at age 15, having met an order of monks in high school and being stricken by their serenity.

"Seeing the peace and kindness in them left an indelible impression in my mind," he said.

As it did in Konchog Norbu, a New Jersey native who first heard the Dalai Lama speak in Philadelphia two decades ago.

"He just knocked me out," said Norbu, now the media and communications coordinator for the Ewam Buddhist Center. "He is a towering figure of virtue and kindness and ethics."