OLATHE, KS (USA) -- A Johnson County Buddhist church has outgrown it's building, and they have a new place to worship picked out. But so far they have been denied the right to use it, and a metro Buddhist leader says that zoning isn't the reason why they can't move in. 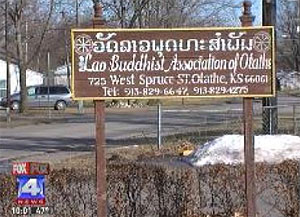 The Lao-Buddhist Association is trying to move it's Olathe temple to a location along 119th Street in Olathe. But the Johnson County Board of Commissioners has so far denied the group a conditional use permit. Neighbors say that the area the Buddhists have chosen is zoned residential, but Lama Chuck Stanford of the Rime Buddhist Center says that discrimination is the real reason behind the opposition.

"This is clearly just ugliness of ethnic and religious prejudice," said Stanford.

Neighbors, who refused to go on camera, told FOX 4 that being opposed to the Buddhist temple doesn't make him a bigot, while another neighbor told FOX 4 that other commercial proposals in the neighborhood have been declined as well.

Standord notes that Christian churches are common in residential areas, and that comments made by residents during a January zoning board meeting indicate fear and ignorance. At the meeting, people raised concerns about traffic, water pollution and "animal sacrifices," along with noise from gongs, which Stanford says are no louder than church bells.

"I'm so shocked that this year, in 2011, in Johnson County, their people would be a little more liberal, and better educated, than that," said Stanford.

The Johnson County Department of Planning, Development and Codes has recommended approval of the Buddhist's permit. But the Northwest Consolidated Zoning Board voted unanimously to recommend denial of the request.

The Lao-Buddhist Association has submitted a second, scaled-back plan to the board, but neighbors say that if it is passed it will open the door for other commercial properties in the area. The Board of Commissioners will take up the issue next Thursday night.