ALBUQUERQUE, NM (USA) -- A Buddhist shrine at the Petroglyph National Monument in Albuquerque is attracting unwanted attention for the National Park Service. 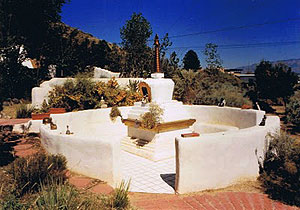 But critics say the park service refuses to make a decision about the religious monument despite clear direction on the issue from the U.S. Constitution.

The controversy began last August, when dirt mounds appeared near the Buddhist stupa located at Petroglyph National Monument . That prompted Buddhists to fear the Park Service was preparing to tear down the shrine. They launched a national e-mail campaign encouraging fellow Buddhists to come and protect the stupa.

It turned out, however, the dirt was for an amphitheater the park was building at the Petroglyph vistor’s center.

But that wasn’t the end of the controversy.

A national advocacy group from Washington D.C., called Public Employees for Environmental Responsibility , heard about the stupa, and, in a letter sent in October, asked for an explanation.

“As we understand the constitution, the government is not supposed to be involved in the establishment of religion,” said Jeff Ruch, PEER’s executive director. “So our National Park Service owns a Buddhist stupa, and we have no idea as to why on Earth that passes legal muster.”

The director of the National Park Service, Jonathan Jarvis, called on his subordinates to make reassuring statements to the public, but remain silent on the stupa’s future, according to park service e-mails.

“The best we could tell, the Park Service has a sort of ‘don’t ask, don’t tell’ policy, which is ‘We hope you don’t ask us because we don’t plan to tell you,’” Ruch said.

“At this time, we don’t have any plans for the stupa,” she said. “We’re waiting to hear from Washington, D.C.”

The stupa is located about 50 yards from the Petroglyph visitor’s center. When the National Park Service bought the two-acre property containing the stupa in 1996, it also came with a home, a Tibetan prayer wheel, a sweat lodge and a swimming pool. The previous owner removed everything but the stupa, and for 15 years no one seemed to notice.

However, other religious iconography at other national parks has not escaped notice.

A cross at Mojave National Park in Southern California was the center of legal wrangling that lasted years until the cross was mysteriously stolen last summer. A similar controversy erupted in 2003 at the Grand Canyon in Arizona surrounding religious plaques placed there in 1970 by the Evangelical Sisterhood of Mary.

The Grand Canyon plaques were removed after the American Civil Liberties Union complained. However, they were reinstalled soon after.

The Park Service promised a policy review after each of those incidents.

“So this is about the fifth instance where the Park Service has responded to a controversy by saying they are doing a legal and policy review,” Ruch said. “But, to our knowledge, they’ve never done one.”

The Park Service has been careful not to talk about the stupa’s future until a decision is made in Washington.