In his first visit to Austin, the Dalai Lama will discuss how individuals can affect change, even on the global level.

Austin, Texas (USA) -- As far as windows to enlightenment go, this one closed pretty quickly. 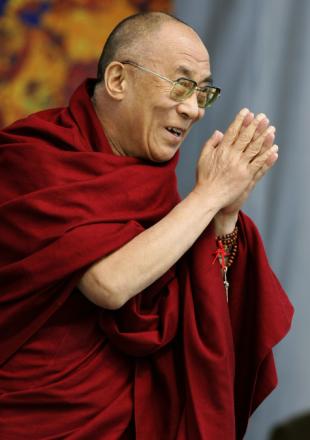 The Dalai Lama, the most influential spiritual leader of Tibetan Buddhism, will speak Tuesday at the Erwin Center, and the line for the free tickets issued earlier this month stretched across the University of Texas campus. The 8,600 tickets for students and faculty members disappeared within four hours. The 3,150 tickets for the general public went in 32 minutes.

Compared to former President Clinton, who spoke at UT in 2003 and 1997, the lines made the 70-year-old Dalai look like a rock star.

"I don't think there has ever been a line as long as it was for the Dalai Lama tickets," said Patricia Teed, assistant director for administrative services at the Texas Union.

It took several days to dispense the tickets to Clinton's 1997 speech; however, there were slightly more tickets available, Erwin Center officials said. Garth Brooks holds the record for an Erwin Center sellout with 17,400 tickets sold in 43 minutes. About 12,500 tickets were available for the Dalai Lama's first visit to Austin, Teed said.

"The thing that struck me was how positive everyone was, even though they had to wait in line for so long," said Crystal Thomas, a Student Events Center staff member who handed out tickets.

Why all the hoopla for a night of peaceful meditation?

"Young people today are so starved for role models for people who live their lives according to spiritual values," said Howard Miller, a UT professor who has taught courses about religion and U.S. pop culture. "The fact that they are lining up to see the Dalai Lama doesn't surprise me at all."

Indeed, everywhere from bookstores to home and garden decor, Zen is definitely in.

Various Buddhist styles and themes are found at local spas, furniture stores and plant nurseries. Its philosophies are intertwined in television shows, such as "Six Feet Under"; meditation classes; and even books, such as "Enlightened Management: Bringing Buddhist Principles to Work."

It all helps make the Dalai Lama, who was born Lhamo Thondup and renamed Jetsun Jamphel Ngawang Lobsang Yeshe Tenzin Gyatso, that much more of a pop culture icon.

Recognized at age 2 as the reincarnation of his predecessor, he has fed the furor by traveling extensively and spreading his message of nonviolence, peace and compassion. He has traveled to about 46 nations since 1967.

The Dalai Lama traditionally claims to be Tibet's head of state; this one has lived in exile since 1959, when he fled to India about nine years after China sent its army into Tibet. He won the 1989 Nobel Peace Prize for his use of nonviolence in seeking Tibetan liberation.

His Sept. 11 visit to Sun Valley, Idaho, reportedly drew such notables as Willie Nelson and Lance Armstrong. Tickets to charity events associated with his appearance cost $550 per person. Tickets for a spiritualism and science symposium in Houston later this month cost $1,000.

In Miller's view, the Dalai Lama's message is particulary important for Americans now.

"People are fed up with the violence and wars in which American culture and religion has become mired down in," he said. "The Dalai Lama is above all that."

All the hype makes hosting the Dalai Lama, who will be speaking about individual responsibility in the global community while in Austin, much different from other speakers.

First, he does not accept honorariums, or payment, though the university will cover travel and security costs. Teed said thecost will probably be $50,000 to $70,000, the same as for other major speakers.

The honorariums for well-known lecture circuit names such as Bill Cosby, motivational speaker Tony Robbins and Clinton can be more than $100,000.

Second, there is no lecture agency to help schedule the Dalai Lama.

"He's not a speaker-for-hire by any stretch," Teed said. "The Dalai Lama is like the pope; you don't just call up the speakers' bureau."

Though Teed would not reveal the details, she acknowledged that part of getting the Dalai Lama to come to town is having the right personal contacts.

"We knew people who had been successful and followed their lead," she said. "It took over a year, a lot of careful planning, navigating through all the right channels and a lot of patience."

Tickets for the speech were selling for up to $50 apiece Friday on eBay.

Teed said anyone wanting to listen to the speech for free can visit the KUT Web site to hear a live audio feed. The Texas Union will have live simulcasts at two spots. UT President Larry Faulkner is scheduled to give an introduction. The Dalai Lama will speak for the first 45 minutes and answer pre-selected questions for 45 minutes.

What: Speech about 'Individual Responsibility in the Global Community.' Ticket required.

Security: Doors open at 2 p.m. and close 15 minutes before the event. Backpacks, briefcases, binoculars, cameras, noisemakers and recording devices will not be allowed.

Parking: Extremely limited. Transportation other than cars is recommended. Lot 108, next to the Erwin Center, has 29 spaces for people with impaired mobility.