Buddhist temple to restart in Mesa

Phoenix, Arizona (USA) -- Venerable Yong Shan strode to the front of the altar in a flowing burnt orange robe and, under the gaze of three life-sized statues of Buddha, beat a drum slowly. 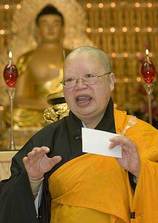 The diminutive Buddhist nun, her head shaved, picked up a tiny bell and gave it one ring, letting the sound tingle through the silent room that was pungent with burning incense.

Twenty-five men and women forming perfect rows knelt and bowed toward the altar. Then the chanting in Mandarin began. It would last more than an hour, as it does every Sunday at the International Buddhist Association of Arizona.

A fixture in north-central Phoenix since 1994, the temple has drawn Chinese-speaking Buddhists from all over the Valley. But it will soon begin anew in Mesa, a major move and expansion that reflect larger demographic changes taking place in the Valley's growing Chinese-speaking immigrant population.

Newer Chinese-speaking immigrants are better educated and more affluent than preceding waves. They are bypassing urban areas where earlier immigrants settled in favor of the East Valley suburbs, home to about a third of the Valley's roughly 20,000 Chinese residents, immigrants and American-born.

"The East Valley, that has been where more of the trendy Asians have moved, mainly because Arizona State University's main campus is in Tempe, and a lot of the high-tech companies are there," said Manny Wong, publisher of Asian American Times, a Chinese-English newspaper in Phoenix.

The growth of the East Valley's Chinese population, which tripled between 1990 and 2005, is drawing more Asian-oriented businesses and services. The East Valley is home to more than half a dozen Chinese or Asian Christian churches, among them Metro Phoenix Chinese Alliance Church and Evangelical Formosan Church in Tempe and the Greater Phoenix Chinese Christian Church in Chandler.

At Lee Lee Oriental Market in Chandler, shoppers can find products from many Asian countries, including Japan, India and Thailand. The area is also attracting other Asian markets and restaurants, Wong said. Sixty percent of his newspaper's 10,000 circulation is in the East Valley.

Still, while the temple's move is an opportunity to expand and be closer to members, it will leave Phoenix without a Chinese-speaking Buddhist place of worship.

The International Buddhist Association congregation includes people from mainland China, Taiwan, Hong Kong and Malaysia, as well as a few non-Asian Buddhists. A year ago, the association paid $800,000 for 5 acres near the southeastern corner of Lindsay and McKellips roads in Mesa.

The association plans to start building a multimillion-dollar, two-story, 20,000-square-foot facility there within two years. Plans also call for conference and meditation rooms, a library and tearoom, and a temple big enough to accommodate 300 to 400 followers, Shan said. The new facility will be larger and more expensive than the current 3,000 square-foot structure, which fits only 50 to 80 followers for Sunday services. It cost $150,000 in 1994, Shan said.

The association decided to build its new facility in Mesa for two reasons: Land was more reasonable, and the location is closer to where many new Chinese and Taiwanese immigrants live, Shan said. The move, she said, is calculated not only to serve existing members, but attract new ones.

From the 1870s, when Chinese immigrants began arriving in Phoenix, through the 1970s, waves of Chinese immigrants tended to settle in Phoenix and Glendale, community leaders say. They mostly came from small villages in southern China with basic education in search of the American dream, for themselves and their children. Many made a living by opening small businesses.

"It was the proverbial corner grocery store or Chinese restaurant. They used these businesses as a base to raise their families and take advantage of the educational opportunities for their children so that they wouldn't have to endure the long hours and hard work in these businesses," said Barry Wong, 47, a Phoenix lawyer and former state legislator.

He is the son of Chinese immigrants who settled in the Valley in the early 1950s, and opened a grocery store in south Phoenix. In contrast, Chinese immigrants who have come since the 1980s tend to be highly educated professionals, drawn by Arizona State University and the area's high-technology manufacturing industry, including companies such as Honeywell, Intel and Motorola.

The Chinese population in Maricopa County doubled from 1990 to 2005, increasing to 19,574 from 9,374, according to data from the Census Bureau and Claritas, a marketing research company. Most of that growth has been in the East Valley, and includes new immigrants and Chinese Americans who have relocated from other parts of the Valley.

Many newcomers are people like Kuo-San Ho, an engineer who works for Honeywell and lives in Mesa. At the International Buddhist Association of Arizona temple one recent Sunday, he pulled a black robe over his clothes and took a spot inside the temple next to a cushion on the floor, joining about two dozen other followers.

Ming Chen, 52, came to the Valley 26 years ago from Taiwan. Chen, who has a master's degree in architecture from ASU, lives in Gilbert and runs his own firm in Chandler. Chen, a former president of the temple in central Phoenix, said the new location in Mesa will be more convenient for members in the East Valley but still accessible to others.

"It's close to the freeway," Chen said.

The Buddhist International Association of Arizona in Phoenix is home to the Valley's only Chinese-speaking Buddhist temple, although there are other Buddhist temples here.

The congregation is affiliated with the Buddha's Light International Association, which traces its roots to the Fo Guang Shan Buddhist Order, the largest Buddhist organization in Taiwan.

Before the temple opened in 1994, many people drove to Los Angeles for services, said Wen Chyi Chiu, 30, a temple member and editor of Az Asian World magazine in Phoenix.

In 1994, the association opened a branch in Phoenix to serve the growing Chinese immigrant population, she said.

"In 1994, the Chinese population was concentrated in Phoenix and Glendale areas, and this was a centrally located area," she said. "But now, the population has transferred more to the East Valley."

The association started in Phoenix with about 100 people but has grown to more than 600, said Shan, a native of Malaysia of Chinese descent.

One recent morning, Shan, 55, stood in front of a blueprint of the planned facility taped to a wall inside the temple on 15th Place in Phoenix. She pointed out the different amenities the association hopes to include that will make the facility not only a temple but also a community center: A library and lounge where people will be able to read Chinese-language newspapers. A kitchen and dinning area for preparing and sharing meals. Classrooms and meditation rooms for studying and practicing Buddhism. Shan said the new facility, still in the design stages, will cost $2 million to $3 million. In addition to bank loans, the money will be raised through fund-raisers and private donations, much of which will come from new members in the East Valley.

"Because of the rapid increase, we feel we need a larger facility," she said.