Reno, Nevada (USA) -- You could fill a planet with everything I don't know about religion, spirituality and philosophy. The more I learn, the more I realize how little I've learned. I guess the rest of you probably feel the same whenever you go on a journey of exploration. 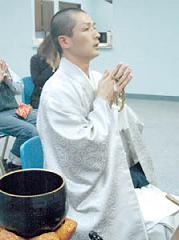 Bob Woerner sent me an email offering me a seat at a special service at the Reno Oddfellows Building on Stardust. It seemed a Buddhist priest, Shogu Kimura, from out of town was going to conduct a service and then address the group.

By this time, I've attended a few Buddhist practices, and I was thinking I was beginning to get a clue as to what to expect.

As usual, my preconceptions were wrong.

Time's a funny thing. I was told the service would begin at 7 p.m., but I arrived promptly at 10 minutes before the hour, and the chanting had already begun. The congregation was seated on blue, molded-plastic chairs, hands folded in prayer-position, some draping prayer beads. Many also held books, from which they read the chants.

At the front of the room, the priest, who was wearing gray silk robes with an off-white intricate sash, close-cropped hair and sandals, sat before an altar that contained two green bouquets, two candles, a bowl of fruit and some small accoutrements that may have held incense or water. In front of the altar and to the priest's right was a bowl-shaped bell, which he rang at various times through the chant. Above it all was a venerated scroll, the Gohonzon. Although the congregation only had 26 members, this was one of the most integrated spiritual groups I've come across. I think almost every skin tone was represented.

I sat in the back row, more not to interrupt anyone than from any sense of propriety. My mind wandered as I attempted to get in the meditation "zone" by trying to pick individual words out of the streaming chant. Since the words were in Japanese, the effort was fruitless. The man to my right, David Murphy, saw my plight and slid over, sharing his prayer book and running his fingers along beneath the syllables. I'm not sure I could chant English at the speed they were going.

Now, please, I'm not going to attempt to exactly describe the ascending order of the prayers or translate the chants; suffice it to say, as I understood what was going on, there were five silent prayers followed by chanting. The first was an offering to Shoten Zenjin; the second, an offering to the Dai-Gohonzon; the third, an offering to Nichiren Daishonin and the successive high priests; the fourth, a prayer for worldwide propagation; the fifth, memorial prayers for the deceased. The prayers were all bookended with the chant, "nam-myoho-renge-kyo," which is loosely translated as "devotion to the mystic law of the Lotus Sutra." This chant, as I understand it, is this sect of Buddhism's means to enlightenment.

After the service, Shogu Kimura gave a short sermon, telling us some of the basic tenets of the Lotus Sutra, and a bit of the history of Shakyamuni Buddha, who established Buddhism in India nearly 3,000 years ago, and Nichiren Daishonin, who is "the True Buddha of the Latter Day of the Law," according to a pamphlet I received at the service. He lived more than 700 years ago in Japan.

I wish there were more room to talk about what the reverend said, but here are some thoughts to ponder: The universe has no beginning and no end. Buddhists do not believe in a directed creation. Buddhism teaches all people to save themselves by practicing rules defined by cause and effect.