LONG BEACH, CA (USA) -- The Dalai Lama has made many trips to the United States in the past 30 years. Each time, he brings messages of peace and enlightenment. 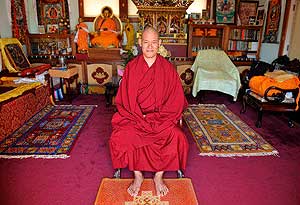 << Khen Rinpoche Geshe Janchub Choeden, the abbot at the Gaden Shartse Thubten Dhargye Ling on April 27, 2011, in Long Beach, Calif. He will be helping with events this week at the Tibetan Culture and Spirituality festivities in Long Beach, culminating with a visit by the Dalai Lama on Sunday. (Jeff Gritchen / Press-Telegram)

On Sunday morning, for the first time in the United States, the leader of Tibetan Buddhism will conduct what is known as a solitary yamantaka initiation.

The ritual allows devotees to reach the highest levels of yoga tantra, or doctrine, and is a necessary step if one is to achieve enlightenment, which is the final goal of Buddhism.

This free event, before his scheduled public speech, is not open to the public. It is meant only for the most serious and committed practitioners of this form of Buddhism. It will be conducted at the Terrace Theater at the Long Beach and already about 1,800 have registered to participate.

Khen Rinpoche Geshe Janchub Choeden, abbot of the Gaden Shartse Thubten Dhargye Ling, a Buddhist center in Long Beach that plays host to the week's events, is thrilled with the decision by the Dalai Lama, which exceeded the monastery's request.

"His Holiness had a different vision," the abbot said. "It may be he sensed it was the right time for such a high-quality and sacred initiation."

He said the Dalai Lama has noticed an uptick in serious followers of Tibetan Buddhism in the U.S. over the years since he began visits in 1979.

Coincidentally, it was the local Gaden Shartse center, then located in Los Angeles, that sponsored the Dalai Lama's trip to the Southland in 1979 and has played host to His Holiness six times since.

Followers believe the Dalai Lama, Tenzing Gyatso, is the latest reincarnation of a line of Buddhist holy men who bring compassion, understanding and peace to the world. The 14th Dalai Lama was awarded the Nobel Peace Prize in 1989. He will be honored by Amnesty International in Long Beach May 4 with its "Shine A Light" award.

The Sunday morning event is a singular chance for those who are devoted to the Dalai Lama and his teachings.

The Rev. Joan Gattuso of the Unity of Greater Cleveland church is one of those making the trek.

She first saw the Dalai Lama 20 years ago in New York and described it as a "transformative experience."

After seeing the Dalai Lama, Gattuso, who was extremely sick at the time and in a wheelchair, recovered and found the experience "awakened my soul."

She has since seen and met the holy man about 20 times, gone through other Buddhist initiations and training and adopted many Buddhist philosophies and practices into her own spirituality. Her latest book, "The Lotus Still Blooms," incorporates much of the Dalai Lama's and Buddhist philosophy.

"I was delighted," she said of learning of the yamantaka. "Every time I am with him it touches my soul. He's authentic and a very, very spiritual man."

Those who participate are expected to continue the prayers and practices they learn for a lifetime, or many lifetimes, in the Buddhist sense of reincarnation.

The Dalai Lama will give the bodhisattva and tantric vows and each practitioner is expected to perform on a daily basis a short sadhana, or spiritual exercise, and recite a set of Buddhist yoga texts six times daily. Attendees are also expected at sometime to attend a week-long Buddhist seminar.

"They don't mess around with their spiritual discipline," Gattuso said with a laugh.

Throughout the month of May, Khen Rinpoche will be offering teachings that build on the initiation and will be available to those who attended the initiation. He will also be offering more general teachings and seminars to the public that will be announced by the Center.

Whether one is a serious practitioner of Buddhism or just curious, Khen Rinpoche says the four days of events being staged at the Long Beach Convention Center will have benefits.

"I think it's important as a modern human being to have a better understanding of our world's different civilizations and cultures," he said. "It's important to respect the values of others with understanding to have friendship and brotherhood with those living on the same planet. I think then you can have a more peaceful world."

Information on the week's events in Long Beach is available online at www.gstdl.org or by phone at 562-621-9865. Information on other events for the Dalai Lama in the Southland is at www.dalailama.com.