Sacramento, CA (USA) -- There are many paths to happiness and enlightenment, and several converged Sunday at Sacramento Buddha Day, the 2,600th anniversary of Buddha's birth, death and moment of enlightenment. 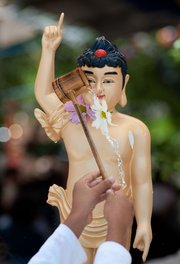 << Water and flowers are poured over a Buddha statue, following tradition.

"Only in America can all these different cultural traditions come together and form a new American Buddhism," said Beth Johnson of Sacramento's River Song Meditation school. "The main benefit of practicing Buddhism is to reduce your experience of suffering, move toward happiness and be a benefit to others. Buddha's teachings are still bringing as much benefit today as they did 2,600 years ago."

Let's not forget Zen Buddhism, a strict Mahayana variation practiced in Japan and the United States that emphasizes emptying your mind and thinking about nothing, explained Sacramento Buddhist teacher Ravi Verma. "You're supposed to sit in front of a wall and not move for as long as five hours, so when you work very hard at it, you can become suddenly enlightened."

An immigrant from Bodhgaya, India, where Buddha found enlightenment under the Bodhi Tree, Verma said, "Buddhism did not convert people – people converted Buddhism and gave it the flavors of the local customs."

Sacramento's rich melting pot has allowed him "to sample all these traditions and take the best of each."

"It's more meditational, and many don't visit the temple," Scherchand said. "It's more likely practiced inside your living room."

Though some adherents of Theravada have clashed with Mahayanas over whose tradition offers the true Dharma (or method leading us to human perfection), the core beliefs are the same.

All believe life is suffering and everything's impermanent and in a state of constant change. Each sect shares the five precepts: Don't kill (that's why many Buddhists are vegetarians); don't take what's not given; abstain from sexual misconduct, having sex without a long-term relationship; abstain from false speech; abstain from intoxicants that make you heedless. "If you sit in front of the TV without taking care of your responsibilities, that is a form of intoxication," Verma said.

Buddhism's nonjudgmental: You judge yourself and make choices based on what you believe will cause the least harm. "Buddha said, 'Don't believe anything just because somebody in robes tells you,' " Varma said.

Meditation – a way to have more control over your thoughts, cravings and attachments – plays a key role in all forms of Buddhism.

To free yourself from anger, emotional reactions and stress, five minutes of mediation daily "is much more beneficial than sitting Sunday for an hour," said Linda Thorell of Sacramento's Lion's Roar Dharma Center, who led a meditation exercise.

To calm, relax and empty your mind, focus on your natural breathing by counting to 10, Thorell said, and if your mind wanders, start over.

"The first few months, your mind goes berserk thinking about phone calls, emails," Verma said. "It took me a year before I started seeing the benefits. Now I'm addicted."

Verma has also limited his teenage sons' cellphone and Facebook usage "because the more distracted you are, the more you suffer."

Chanting is a form of meditation. Kimberly Pell of the Buddhist Church of Sacramento says her practice of "Pure Land Buddhism" expresses gratitude by reciting the Zen chant, "namo amida butsu," meaning "I bow to the Buddha, or take refugee in Amida Buddha," an aspect of Buddhism representing wisdom and compassion.

Parakrama Gurusinghe, president of the Sri Lankan Buddhist Temple of West Sacramento, explained that he and other Theravadas are striving to become enlightened to break the cycles of birth, death and rebirth.

Many ethnic Buddhists practice by going to the temple and giving money and food to priests who read texts, chant and meditate for them, Verma said.

"I believe you can't get over your suffering unless you work for others. And some Buddhists who reach enlightenment can control how they die and can come back specifically to help others."