Honolulu, Hawaii (USA) -- Following the massive earthquake and tsunami that devastated northern Japan in March, Master Shinso Ito of the Shinnyo-en Buddhist order stood at a point that divided life and death. 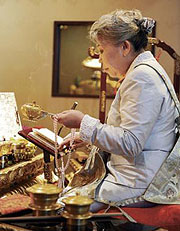 << Master Shinso Ito, who will preside over today's lantern-floating ceremony at Magic Island, performs a purification ritual to honor the spirits of the dead at Shinnyo-en Hawaii.
Courtesy Shinnyo-en Hawaii

In Ofunato City, "I stood on the front line of destruction, and saw the other side still intact," she recalled. "I felt how life and death are next to each other."

Ito is here to preside over today's 13th annual Lantern Floating Hawaii ceremony at Magic Island at 6:30 p.m., which allows the living to connect with the spirits of the dead. It was she who brought the custom to Hawaii from Japan in 1999, giving people an opportunity to write a message to a loved one or a prayer for others on a lantern, which is set adrift from shore.

With some 40,000 expected to attend the event, the largest of 3,000 lanterns, distinguished by the framework of a ship's mast, will carry out to sea prayers for the victims of the Japan's disaster and calamities elsewhere in the world.

Ito feels she can best honor those who died in Japan's tragedy by making it her mission to perpetuate the good they accomplished while living, she said through a translator in an interview Saturday.

She encourages others to become "beacons of light and hope for as many people as possible," adding, "A light is a very, very tiny thing, but when many people light one, it becomes very, very bright."

Ito and leaders from Jewish and Christian faiths will put a flame to the ceremonial Light of Harmony.

"My wish, really, is to expand this little circle of harmonious cooperation to the world. This collaboration should not be done only at times of disaster, but everyday life, whether it's working together as a team, or between countries," she said. Ito added that she hopes the close personal ties between Hawaii and Japan will extend to the relationship between the U.S. and Japan.

She said she is impressed with the selflessness and kindness of American relief volunteers and the millions who donated funds, and the survivors were deeply appreciative.

"Master is a living example of the Buddhist teachings — her dedication, sincerity and humbleness," said the Rev. Given Tokunaga of the Shinnyo-en Hawaii temple in Moiliili, which is organizing the ceremony with sponsor Na¯ Lei Aloha Foundation.

Shinnyo-en volunteers in Japan were among the first to assist areas hit by disaster, and Ito joined them in making and serving soup, and providing supplies. Ito said she was particularly impressed by a few people she met during her forays into the stricken areas, including two doctors and a firefighter who worked day and night in relief efforts after surviving the quake and tsunami themselves. Another, going back and forth to help others escape the impending tsunami, didn't make it out in time himself, and drowned, she said.

Ito said those who seek meaning from the tragedy might want to remember that humans are not in a position to feel in control of nature, but they can learn from the experience and plan ways to prevent damage and loss of lives in the future.

"As someone still living, I would like to do more to help others, and share joy, warmth and kindness to other people," Ito said.

The daughter and successor of Shinnyo-en founder Shinjo Ito, she is one of the first women to head a prominent Buddhist order, and has attained the rank of Buddhist great master, according to www.shinnyoen.org. The sect has about 100 temples worldwide.

She has formed partnerships with organizations such as the United Nations, the Red Cross, Doctors Without Borders and the Catholic Church since assuming leadership in 1989.

Individuals may write messages on lanterns to deceased loved ones, or prayers for victims of disasters or world peace. They will be attached to lanterns that will be available on a first-come, first-served basis in a large tent in the Magic Island parking lot beginning at 1 p.m. Families are asked to limit themselves to one lantern per family to accommodate as many people as possible. Lanterns are free, but donations received will be gifted to the City and County of Honolulu.