FRESNO, Calif. (KFSN) -- Owners of the Fresno Buddhist temple are struggling to find a new owner of the historic building. The congregation moved to a multi-purpose center last year and is in the process of raising money for a new temple. But the Chinatown landmark on Kern and E Street needs to find a very unique buyer. 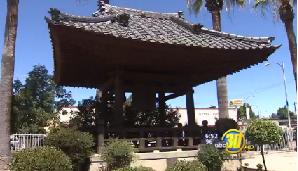 The towering temple with its ornate roof and cascading steps used to be the center of activity for Asian Americans. The first generation of Japanese to settle in the Valley built the temple more than 100 years ago.

Bob Ishikawa said, "I grew up here, and I went to Dharma School here or Sunday school. I got married here, and my parents had funeral services here."

Fresno Attorney Bob Ishikawa is on the building committee for the new temple, a project begun ten years ago.

The congregation decided to move to North Fresno where most of the city's Japanese American families have moved.

This family center was the first phase of the project, now the congregation has to raise $3 million for the next phase, a beautiful modern-style temple. However, they have to sell the historic building in Chinatown first.

The temple board contacted several Japanese cultural organizations across the state hoping they would take over the temple, but they weren't interested. They contacted the city of Fresno, but the city wasn't interested either. So they decided to put the temple on the open market.

"We've had a number of other churches look at it, and community organizations have looked at it," said Mike Ryan. "A mortuary has looked at it. It's a very unique building so we'll see."

Commercial Realtor Mike Ryan says the asking price is $1.1 million. The new owner can remodel and redecorate the inside of the temple and surrounding buildings, but there are limitations on the outside.

Ryan said, "The main temple building, the exterior cannot be touched, it's an historic building, so you can't do anything apart from paint and TLC."

Despite the unique selling situation, Ryan believes he can move the property in six to eight months, a bittersweet thought for Ishikawa and other longtime members of the congregation.