Honolulu Ceremony among the Largest Memorial Day Observances in the U.S.A. with 40,000+ Audience Expected at Ala Moana Beach Park

TOKYO, Japan -- Shinnyo-en, the Buddhist denomination in which all people regardless of age, gender, nationality, or religious background can cultivate the innate kernel of enlightenment existing in all beings, announced today confirmed details about the 14th annual Lantern Floating Hawai'i ceremony (http://www.lanternfloatinghawaii.com/ ). 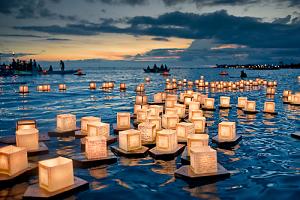 Lantern Floating Hawai'i 2012 will culminate the day-long public celebrations of one of the largest Memorial Day observances in the U.S.A. at the Ala Moana Beach Park ( http://www1.honolulu.gov/parks/programs/beach/alamoana.htm ) on Monday, May 28, 2012.

The ceremony is scheduled to begin at 6:00 PM HAST (Midnight EDT) and continue for about ninety minutes. The event will air live on Hawai'i News Now, KGMB and stream live via webcast on Lantern Floating Hawaii ( http://www.lanternfloatinghawaii.com/ ).

Lantern Floating Hawai'i, while sponsored by a Buddhist organization, is a non-denominational, secular observance open and free to everyone. The ceremony is designed to help us remember and honor all the people who have gone before us and helped us, and to renew our compassionate commitment to all people and to all life on earth as we go forward in our lives.

Lantern Floating Hawai'i has been conducted annually on Memorial Day in Honolulu since 1999, when it was first brought to Honolulu because of Hawai'i's unique geographical, historic, cultural and demographic profile.
The ceremony, held at sunset, is a contemporary adaptation of ancient Asian fire and water ceremonies, ( http://www.shinnyoen.org/fire-water-ceremonies.html ) designed to awaken compassion for all life and all life forms - present, past and future. While most traditional Buddhist rituals focus on personal awakening, this Shinnyo ceremony is dedicated to awakening people to their innate compassionate and altruistic nature, transcending all boundaries of age, gender, nationality, ethnicity, and religious tradition, and directing the positive energy of the ceremony outward with the hope that all people can live in a world of hope and harmony.

"Hawai'i is at the center of the largest ocean, a cultural and spiritual midpoint between East and West," said Shinso Ito, the Head Priest of Shinnyo-en ( http://www.shinnyoen.org/her-holiness-shinso-ito.html ).
"Hawai'i has deeply witnessed and expressed both times of suffering and eventually times of reconciliation and harmony among peoples, cultures, and religions of the world. Lantern Floating Hawai'i is offered to all people as a moment when we can honor both the suffering and the enduring compassion that comes to us from the past. I believe that people can come away from Lantern Floating Hawai'i with a renewed compassion, deep respect for all life, and motivation for altruistic service."

Public participation at Lantern Floating Hawai'i is FREE, including free availability of lanterns for the public. Public parking is also free at the Hawai'i Convention Center ( http://www.hawaiiconvention.com/files/8-5x11_L2.aspx ) from 9:00 AM - Midnight.

Lantern Floating Hawai'i is organized by the Honolulu-based Na Lei Aloha Foundation ( http://www.naleialoha.org/ ), the secular, community-building arm of the Shinnyo Buddhist order in Hawai'i, and is funded and officiated by Shinnyo-en ( http://www.shinnyoen.org/ ).

Shinnyo-en is a Buddhist denomination originally established in Japan and with members today throughout the world. Shinnyo-en is, first and foremost, a place for Buddhist training, in which all people regardless of age, gender, nationality, or religious background can cultivate their innate buddha nature, the kernel of enlightenment existing in all beings. Shinnyo-en Buddhism is differentiated by its teachings drawn from the Mahaparinirvana Sutra, by its deep roots in ancient esoteric Buddhist practices, and by its distinctive form of meditative training, called Sesshin.