A Buddhist temple in a Westminster neighborhood has some residents grousing about increased traffic and other annoyances.

Los Angeles, CA (USA) -- The sound of chanting echoed through the makeshift temple, to the slow steady pulse of a drum. 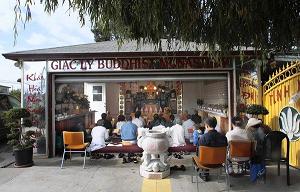 << The congregation of Tinh Xa Giac Ly gathers for worship and other activities in the converted garage of a former single-family home in a residential neighborhood in Westminster. (Anne Cusack, Los Angeles Times / December 2, 2012)

Forty-nine days had passed since Jonathan Van's uncle had died in Vietnam, and he and his family gathered at Tinh Xa Giac Ly in Westminster, chanting so that his spirit might find its path. The puffs of incense dancing in the air would serve as the vehicle to carry his spirit to the next life, according to Buddhist tradition.

The relatives knelt on the floor of the two-car garage, high heels and sandals scattered outside on the driveway, as other loved ones spilled out to the patio, reciting from yellow songbooks.

The sound, for Van, calmed his own spirit.

"For me the chanting is very soothing," Van said. "Relieves stress."

Less so for some of the neighbors, however.

The temple sits among the suburban tract homes at Titus Street and Hazard Avenue, just steps from Little Saigon, converted about 26 years ago from a typical family home to a house of worship.

The sound of the chanting and the unfamiliar smells and rituals are an unwelcome intrusion to some in the neighborhood in the heart of Orange County, the traffic an inconvenience.

Officials said misunderstandings between the start-up temples and residents who find their neighborhoods transformed are an ongoing issue in the Asian communities that sprawl across Westminster, Garden Grove and Santa Ana.

Rita Leon and her brother Rudy Lastra live across the street from Tinh Xa Giac Ly and say their conflicts with the temple's worshipers have almost turned physical.

And traffic generated by visitors, they said, has turned their residential street into a bustling thoroughfare.

The temple's leader, the Most Venerable Thich Giác Si, said he is mindful of his neighbors' concerns and reminds visitors to park outside the neighborhood to reduce the number of cars streaming along the residential streets.

"In many religious communities you will see this tradition of starting a congregation in your home before you're able to buy or build," Kennedy said.

Even though the face of central Orange County began changing decades ago with the arrival of Vietnamese immigrants, the tiny neighborhood temples sometimes seem foreign to residents when they spring up.

"There's no question where you're confronted with something you don't understand or are unfamiliar with, you're uncomfortable," Kennedy said.

Often stereotypes about a culture or its images — such as the Buddhist swastika or Sikh turbans — can "color our thinking" about a neighbor, Kennedy said. But the conflicts, he said, sometimes sort themselves out.

Van agreed, saying some may feel uncomfortable with the chanting because of a language barrier, but the sound can comfort even those unfamiliar with it.

"You don't have to understand it for it to be soothing to your ears," he said.

For the recent gathering, Van's relatives came from as far as North Hollywood and West Covina to visit the temple to participate in the final day of prayer for his uncle's spirit, 49 days being the period a spirit needs to find its new life, according to Buddhist tradition.

The next time the family will pray for their uncle will be at the one-year anniversary of his death.

In addition to hosting ceremonies for the dead, Van said the temple gives back too — donating clothes and vegetarian food to the homeless and helping with construction of water wells in Vietnam. The temple also sends money to 120 handicapped people in Vietnam, Thich Giác Si said.

Thich Giác Si, who said he made his way through temples across the state before arriving in Westminster, said visitors may be drawn to his temple more than to others because its focus is on service and religious growth rather than a pressurized environment where fundraising is a priority.

Dressed in saffron yellow and orange robes, he said he came here with the idea of working to create a sense of community.

The temple has flourished over time, providing a haven for as many as 160 youth members and 1,000 families, he said.

"We offer support and peace."