Ontario's Japanese Americans created an institution that, 60 years later, is just as important to the community today

ONTARIO, Idaho (USA) -- Connie Shimojima and his family settled in Ontario in 1943 after leaving a Japanese internment camp in northern California. The Idaho-Oregon Buddhist Temple was not yet in existence. 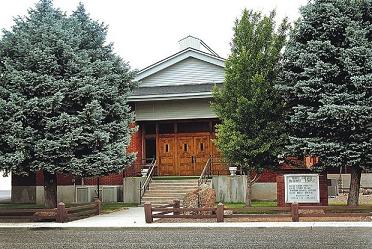 << The Idaho-Oregon Buddhist Temple in downtown Ontario was built in 1952 with the help of residents and temple members.

"I thought, 'We have no religion here,'" said Shimojima, 94. "We were used to the temple presence."

President Franklin D. Roosevelt signed an executive order in 1942 commanding more than 100,000 Japanese Americans who lived on the West Coast to enter internment camps. In 1943, Shimojima and his family, including his 1-month-old son, left the internment camp in Tulelake on a sugar beet bus to look for farming work in the Treasure Valley.

They had been in the camp for one year.

"It was my responsibility as oldest son to find something for my family," said Shimojima, who lives in Ontario with his wife, Glo. "I don't know how we did it."

Joshin Dennis Fujimoto, the current reverend of the temple, said those first Japanese Americans who settled in Ontario during and after the war had a "pioneer spirit."

"They were eating onions that they grew because that's all they had," Fujimoto said. "Those were very sparse beginnings that they came here with."

By 1946, the Japanese American evacuees from the internment camps who had settled in Ontario expressed a need for a Buddhist temple, to worship in and to congregate for social activities. A plot of land was acquired six miles southwest of Ontario, near today's golf course, under the direction of the Rev. Tesshin Shibata, who previously served as the minister at the White River Buddhist Temple in Auburn, Wash., where Shimojima was born.

"It was half for Rev. Shibata, his parsonage, and the other half was the temple," Shimojima said.

The congregation outgrew the small temple by 1949. Church members reached a decision to build a temple closer to town, and land was purchased on the east side of Ontario. Temple members collected funds to build the new temple and donated their time in the construction, working on the building in the evenings after completing their own day's work.

"We were able to use our own hands to build it," Shimojima said. "I built the front staircase. I'm pretty proud of that."

Groundbreaking ceremonies for the temple, which is one of only two Buddhist Churches of America in Oregon, took place in 1952.

Japanese Americans now comprise about 1.5 percent of Malheur County's 31,000 residents, five times the state average, said Charles Rynerson, an analyst for Portland State University's Center for Population Research and Census, in an article by the Oregonian in 2009.

"I think it's very positive that there was a growth period after the war for the larger community to be able to accept the Japanese American community and to recognize that they are Americans, and they're not the enemy," Fujimoto said.

"This social aspect was essential in people being able to meet others who were of similar heritage and background and similar in family values," Fujimoto said.

However, Fujimoto estimates 10 percent of his present 150-member congregation is not Japanese.

"I would think we have a form of Buddhism here that has been in America for over 100 years, and it's very suited to the American lifestyle," Fujimoto said. "We're not a cultural museum. The teachings are applicable to life in America today. They're not just for Japanese Americans, but for people of all backgrounds and ethnicities."

Steve Willhite, who joined the Buddhist temple two years ago with his wife, said he was drawn to the nonjudgmental community.

"It's a peaceful philosophy that emphasizes a spirit of thankfulness and interconnectedness with everyone and everything," said Willhite, 47, who is from Payette.

"It teaches you to let go of your ego."