WEST VALLEY CITY, Utah (USA) -- About 60 Buddhist monks from around the world were in Utah this weekend to bless the newest and only Cambodian Buddhist temple in the state. 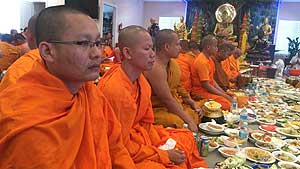 << About 60 Buddhist monks from around the world were in Utah this weekend to bless the newest and only Cambodian Buddhist temple in the state. (Photo: Ray Boone, KSL-TV)

It is a rite that most Buddhists don't get to witness in their lifetime, as new temples, especially in the United States, are rarely built and tend to stand for a century or more.

"It's a pretty big deal for the people here," said Paul Rou, former director of the board that governs the new Wat Buddhikaram Temple. He said the local congregation, of about 300 families, has met in a detached garage of a 1960s home for the last 30 years.

And while the garage space was decorated to make it look like a place of gathering and worship, the community of local Cambodian Buddhists wanted something more. They donated time, talents, money and other resources to build the new 4,000 square-foot temple for the next generation of Buddhists living in Utah.

"It is important to have Cambodian monasteries in the United States to preserve Buddhism and the culture here," said Soeurng Vuthy, a Cambodian monk who traveled from California to take part in the unique ceremony, called Bon Banchos Sima.

Following three days of religious rituals, which began Friday, the temple will be open for the formal use of the local Buddhist monks. The monks who live in the small home on the property will recite chants and pray at the temple on a regular basis throughout the year.

Members of the Buddhist community plan to visit the temple during annual holidays and will hold funerals there.

"It is a good opportunity for people to come in their traditional costume and be able to talk about the peace and happiness in their daily lives," 40-year-old Vuthy said, adding that the goal of Buddhism "is to deliver one's self from the pain and suffering in the realm of the universe."

Vibol Tiem, of Farmington, serves on the board of directors for the local congregation and said he hopes the new temple provides a better opportunity for the youth to see more of the Cambodian Buddhist culture and pay respect to the monks.
"It is important to have Cambodian monasteries in the United States to preserve Buddhism and the culture here."
–Soeurng Vuthy, Cambodian monk

Saturday's local ceremony marked the second for Mary Hingsangiem, of Virginia. She said she traveled to Utah to experience the "special occasion" and for another opportunity to see the monks.

Hingsangiem was forced out of her home by the Communist Khmer Rouge and ultimately escaped the country through Thailand and arrived in the U.S. as a refugee in 1980.

"I am just so glad to be alive and be able to make friends here," she said. "This is my second home." She is impressed by the dedication and hard work of the monks, who work hard to prepare for and perform at inauguration ceremonies.

Through a translator, the local priest, Son Vanna, said he loves Buddhism because it portrays the honesty and reality of life and death. He said he was happy so many people came to the temple ceremony.

Women wore traditional attire, including brightly colored fine silks, lace and scarves tied over one shoulder. No shoes are worn inside the temple.

Monks recited memorized chants for several hours on Saturday and then sat down to eat the offerings of food that members of the community had brought to show their respect. Hundreds of plates of food were spread in front of them and as they ate their once-daily meal, the rest of the people in temple prayed and then enjoyed what was leftover when the monks were done.

Several strands of yarn were wrapped around the circumference of the temple and across the ceiling of the worship space, to "spiritually seal the temple," holding the monks' blessings in, Rou said. Another ritual for the opening of the new temple involved large boxes at the cornerstones and center of the building where people could deposit "wishes" — money for good fortune, books for knowledge, lipstick for beauty, etc. The items will be buried, hopefully bringing the intended blessing in the future or next life.

The temple and inauguration ceremony rituals are free and open to the public. It is located at 3325 W. 3800 South, in West Valley City.

"We're not out to recruit new people," said Richard Chea, a Buddhist living in Salt Lake City. "We hope that in time, people will see the value of the close-knit community that we have and the openness of this religion."

Chea said Buddhism is more of a culture or way of life for its followers than a religion. It remains unstructured for every day men and women, who, he said, are encouraged to live by "normal human standards, which is acting with basic goodness."