With a Buddhist chant and a blessing, guiding lost souls

Tradition honors the departed with food, prayers and song

SAN DIEGO, CA (USA) -- With the sounds of Vietnamese monks chanting 100 feet away, Phillip Au sat in vigil graveside at Greenwood Memorial Park to honor the memory of his mother, Truong Thi Lang, who died in 2006. 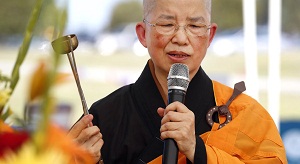 << Man Yuan, from the Hsi Fang Temple, leads chanting prayers during Vu Lan, an annual festival that allows families to show their respects to ancestors, parents and loved ones who have passed away. The event, hosted by Greenwood Memorial Park in San Diego, included participants from local Buddhist temples and monasteries. Nancee E. Lewis

“Today,” the Lemon Grove resident said, “is about remembering your father and your mother and anybody who has passed away.”

Au - joined by his sister, Loan, and daughter Angelina, 9, and son Richie, 11 - was among dozens who came to the cemetery on a blistering Saturday to observe the Hungry Ghosts Festival, a Buddhist and Taoist tradition dating back to the sixth century.

The faithful bring offerings of fruit, rice and incense to Buddha. To help guide tormented souls, relatives burn incense and offer fruit and flowers. The holiday was believed to have been first observed in China as a way to help absolve the transgressions of lost souls during a time in the lunar calendar when the realms of heaven and hell are open.

The tradition spread to other Asian countries, including Vietnam, where it is observed as Vu Lan, or Wandering Soul’s Day. Monks and relatives say prayers and bring offerings to secure forgiveness for lost souls. It is also known as the Vietnamese Mother's Day.

“It’s a way to say thank you to your mother, your father,” said Master Nguyen Sieu, a monk with the Phat Da Buddhist Temple on 30th Street in University Heights. “It’s an important day in Buddhism - a way for everybody who’s living to show their appreciation for the dead. It’s our way of blessing them.”
photo
Attendees listen as monks from Phat Da Buddhist Temple chant during Vu Lan, an annual festival that allows families to show their respects to ancestors, parents and loved ones who have passed away. The event, hosted by Greenwood Memorial Park in San Diego, included participants from local Buddhist temples and monasteries. Nancee E. Lewis

“It is our wish that this tradition will continue for years to come, for we can never forget our duty to honor our ancestors,” Fiorelli said in remarks that opened a two-hour ceremony that featured monks chanting in Chinese and Vietnamese.

Kim Duong of Mira Mesa joined other members of the Phat Da Buddhist Temple on a pilgrimage to Greenwood to offer her respects.

“Today is about remembering,” said Duong, who helped hand out traditional Vietnamese banh mi sandwiches after the ceremony. “Remembering those who have gone before us - our families, our ancestors.”

About 20 members of Buddha’s Light International Association chanted during the Chinese portion of Saturday’s ceremony. They were there to support yellow-robed monks and nuns from the Hsi Fang Temple on Park Boulevard.

Au came to pray for his mother. Next to her headstone sat a pot of bright yellow marigolds, and on her grave, a white paper plate with seven pieces of guava.

With traditional Vietnamese flags fluttering in the wind, Au sat a few feet away from the image of his mother, his head bowed down.