SAN DIEGO, CA (USA) -- The Greek gods on Fraternity Row at San Diego State University may have to make room for the Buddha. 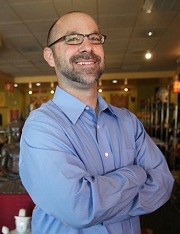 Planning is underway for a Buddhist fraternity and sorority at the school known for its partying reputation.

Jeff Zlotnik, a founder of the Dharma Bum Temple in downtown San Diego, said he envisions the houses offering classes in Buddhism and meditation to help college students cope with stress, anxiety and depression.

"We're not looking to start this heavy religious organization," he told The San Diego Union-Tribune (http://bit.ly/1NbV83R). "This is a cultural organization. We're not trying to create ordained Buddhists."

Zlotnik floated the idea by Abby Cervantes, a student at the temple, who had started a sorority when she was in college in 2011. The two began working on creating the houses that will be called Delta Bet Tau fraternity and Delta Beta Theta sorority.

Zlotnik, 40, a San Diego native who was in a frat at the University of Arizona, said that while Greek life is known for wild parties it can also help students mature responsibly. San Diego State is often on the list of the nation's party schools.

Professor Sandra Wawrytko said she's mentioned the houses in Buddhism and philosophy classes she teaches and thinks her students are interested in joining.

"It can definitely help the fraternity and sororities on campuses to see different models," she said.

Sarah Walsh, 20, a journalism and media studies student, learned about the religion in a college class and began taking classes at the Dharma Bum Temple, which takes its name from Jack Kerouac's "The Dharma Bums."

"They had a meditation club at school, and we're rebooting that," she said. "We're calling it the Aztec Dharma Bums. That will be a feeder into the sorority and fraternity. I think a lot of people will be interested in them."

The North-American Interfraternity Conference said there are no other Buddhist Greek organizations in the U.S., Zlotnik said. If successful, he hopes to expand to other campuses.

Zlotnik said he was encouraged after meeting Friday with a school official Friday about the planning process, though he acknowledged it could take a couple years.

"It's a long process, but part of Buddhist practice is to be patient," he said.