San Bernardino, CA (USA) -- Fear is affecting attendance at a Buddhist temple in San Bernardino located less than a mile from last week’s shootout between police and the armed couple involved in the mass shooting at Inland Regional Center, a temple leader said Sunday. 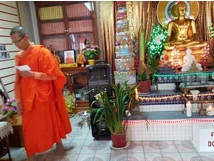 He usually sees about 30 to 35 people at the temple on prayer days, but there we’re only 20 on Thursday, he said.