Redwood Valley, California (USA) -- In English, Abhayagiri means Fearless Mountain, serving as a refuge where one can be free from fear, knowing that the land and the community practice harmlessness, honesty and respect. The Buddha spoke of the gift of fearlessness as one of the greatest gifts we can give each other. 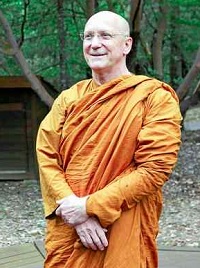 << Ajahn Pasanno is abbot of Abhayagiri Buddhist Monastery in Redwood Valley dedicated to the spiritual practice in the Thai Forest Tradition, a branch of the Theravada Buddhist tradition. Chris Pugh-Ukiah Daily Journal

Riding on dirt roads through forested woodlands, standing in the back of a pickup truck with Ajahn Pasanno, the gentle and unassuming abbot of Abhayagiri Buddhist Monastery in Redwood Valley, he points out the small cabins constructed over the past 20 years that serve as dwellings for resident monks who dedicate their lives to a spiritual practice in the Thai Forest Tradition, a branch of the Theravada Buddhist tradition.

Ajahn Pasanno’s interest in spirituality was piqued during his undergraduate work at the University of Winnipeg, Canada, seeking something peaceful, something not confusing, not chaotic.

“In those days, the late ’60s, where I grew up in northern Manitoba, there was little available,” he says. “I was looking for something solid, something real in human existence.”

After experiencing different traditions, it was Buddhism to which he was drawn. He finished his university studies with a vague idea of seeing the world and finding Buddhist practitioners with whom he could study.

He traveled to Europe, throughout Asia and the Middle East, passing through Thailand, unaware it was a Buddhist country; it was there that he felt a strong connection and began his path into Buddhism and meditation.

His introduction was a rather hardcore, month-long retreat at a meditation center in Chiang Mai. He traveled to Bangkok and in 1974, at the age of 24, he took what he thought to be a temporary ordination as a monk, intending to stay only a few months and then continue with his travels.

Meeting Thai meditation master Ajahn Chah changed his life trajectory; he stayed and studied and trained with the great teacher and in his ninth year, Ajahn Passano became abbot of Wat Pah Nanachat, an international forest monastery established by Ajahn Chah for people of varied nationalities- a place he remained for the next 15 years.

“There was a presence about Ajahn Chah; he seemed to be solid and peaceful and joyful, at ease with everything going on around him. The training was in a natural setting, a forest, a Thai tropical jungle, something very attractive to me.
Advertisement

“We tend to get distracted, and the nature of the mind is to be drawn out to the senses; the forest tradition focuses on meditation and simplicity of lifestyle. Being in this kind of setting helps support inner tranquility, to establish a base of clarity. We all aspire to be more peaceful and calm.

“A monastery in Thailand is a place where all the different elements of a culture and society come together. It’s unlike the Western concept of isolation. It’s a center, an anchor for the community. Everyone is plugged in, whether it be poor farmers, merchants, military or civil servants. It’s a place where people can gather, learn and experience an example of a skillful life,” he says.

In the late ’90s, with the support of a Bay Area foundation intent on establishing a branch monastery of Ajahn Chah’s teachings and the generous and timely gift of a 125-acre parcel off Tomki Road by Master Hua of the City of Ten Thousand Buddhas in Talmage, he and Ajahn Amaro, a fellow monk, agreed to help each other in establishing Abhayagiri Monastery.

With a smile, he says of Ajahn Amaro, “I knew him in Thailand, in 1978, when he first walked in off the beach.”

Uncertain about how to survive on a bare parcel of land, they were able, through serendipitous circumstances, to purchase an adjacent 125-acre parcel that had a small house, a garage and running water.

Ajahn Amaro arrived with another monk and a postulate in June of 1996 where they were met by two laywomen who had prepared a lunch for them. They lived in tents while building small cabins, less than 120 square feet, and Ajahn Pasanno, who arrived six months later, was able to move into one of the newly constructed dwellings.

With stop-construction orders from the county, it took another couple of years for the monastery to come under compliance of the law. The community was growing; people arrived for meditation sessions; there was interest from those wanting to become ordained.

Today the monastery has blossomed into a thriving community with 20 simple resident/guest cabins dotted throughout the woodlands, a meditation hall, a workshop, a wood-fired sauna, water tanks and a pump house, solar arrays, several miles of trails, a women’s guest house, an ordination platform and a commons area that serves as a central gathering place for the monks.

With need for yet more growth, construction of a two-storied, 7,740-square- foot building began three years ago. Plans include a larger kitchen and meditation hall, a conference room, a children’s room, a library, a food storage area, rest rooms and showers for visitors, a shrine room, a disabled guest room, a room for senior visiting monks and an elevator. Although the foundation, framing and siding are in place, it has not yet been completed.

“This is the most ambitious project we’ve ever done,” says Dennis Crean, lay supporter of the community, “but there’s no active fundraising; when the money arrives the construction will continue.”

Their tradition is one of a mendicant lifestyle that relies on offerings in everything that they do. The monks and postulates are not allowed to handle money; they have no garden, no cottage industry, making them dependent on the generosity of others.

“Everything is freely given and those who come usually do so with an offering. We accept it all. People are welcome to visit at any time for an afternoon, a week, with no charge; no invitation is required. It makes us accessible to anyone who wants to come here; we are not cloistered. People feel a connection to a community with which they are involved and with that connection, they become invested in its well-being,” says Ajahn Pasanno.

Crean adds, “It helps to keep you aspiring to a high standard, morally accountable in terms of your behavior. If people are not inspired by what is here, the monks won’t have food. It’s a direct connection.”

The monks live a highly ascetic lifestyle. They eat one main meal a day between dawn and noon, part of which comes from their weekly alms rounds in Ukiah, Redwood Valley and Willits and the rest coming from donations.

They live by 227 main precepts with the primary ones being non-harming, honesty and celibacy. There are rules that govern internal communal harmony and those that govern harmony between the monastics and the lay community.

Their requisites are simple: the basic necessities of food, clothing, shelter and medicine, limiting the amount of their possessions.

“We only take what is given to us,” say Ajahn Pasanno.

The community supports 12 to 20 residents, and currently there are 12 fully ordained monks living at Abhayagiri, one postulate and two novices.

Abhayagiri Monastery has become a hub for Buddhist monasteries in the Thai Tradition in North America and of the over 25 to 30 monks who have been ordained over the years, many have moved on to live in other monasteries or to initiate new ones.

As the abbot of Aghayagiri, Ajahn Pasanno feels deeply grateful to the Buddhist teachings for giving him an anchor in his own life also allowing him to share what he has learned with others.

“This place is such a peaceful refuge; the world needs places of peace and sanity. Human beings prefer to be peaceful and happy rather than confused and miserable,” he says.

The day begins at 8 a.m. and will include informal tours, slideshows, a meal offering and reflections from monastic guests. All are welcome for all or part of the day. For more information, go to abhayagiri.org.
TOP