Little Saigon residents say they feel a connection with the Dalai Lama, who will visit new Buddhist temple

Orange County, CA (USA) -- The 14th Dalai Lama – spiritual leader to hundreds of millions of Buddhists, political power player, an all-around Lama of the people – is probably the world’s most famous refugee. 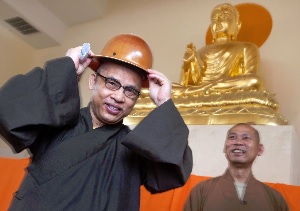 << Thich Vien Ly, abbot at the Chua Dieu Ngu Buddhist temple in Westminster, puts on a hard hat as his brother Thich Vien Huy looks on in the main temple, which is still under construction. MICHAEL GOULDING, STAFF PHOTOGRAPHER

Orange County’s Little Saigon – a place with more Vietnamese people than any place outside of Vietnam – is a community built by refugees.

So it’s natural that the Dalai Lama and Little Saigon have a special connection.

The man who calls himself a “simple Buddhist monk” is seen in Little Saigon as a rebel who stood up to a powerful communist regime, a champion for human rights and freedom.

And, often, as a welcome visitor.

Last year, the Dalai Lama celebrated his 80th birthday at the Honda Center in Anaheim and led the Global Compassion Summit at UC Irvine, where a scholarship for student leaders is named after him.

Last July, the Dalai Lama challenged Orange County city and school officials to expand the Kindness Campaign, pioneered by Anaheim Mayor Tom Tait, in which 24 Anaheim elementary schools participated in a program known as the Million Acts of Kindness.

The Little Saigon community responded. In August, state Sen. Janet Nguyen – who grew up and rose to political power in Little Saigon – launched the #KindCalifornia campaign, working with the Orange County Food Bank and other local community partners. Other cities, including the Little Saigon sections of Westminster, Garden Grove and Santa Ana, have jumped on the kindness bandwagon.

Westminster Mayor Tri Ta said the monk had a profound impact on him during their meeting last year. He added that the upcoming Little Saigon visit – the Dalai Lama’s first exclusive stop in the community – will be special because it brings together people with a common worldview.

“It means a lot,” Ta said. “Especially to this community that is made up of refugees, who risked their lives for freedom.”

Many people who live in Little Saigon, including this temple’s abbot, Thich Vien Ly, say they feel a personal connection to the Dalai Lama.

Last year, Ly visited the the Dalai Lama in Dharamsala, India, the Himalayan town the monk has called home since his exile from Tibet in 1959. During their meeting, Ly invited the Dalai Lama to visit Little Saigon and help usher in the opening of the temple in Westminster.

“He immediately smiled, gave me a thumbs-up and said, ‘Yes, I’ll be there.’”

The Dalai Lama also gave the abbot a gift: an idol of the Buddha to be installed in the new temple.

Ly, 60, said the Dalai Lama holds a special place in the hearts of the Vietnamese refugee community because he speaks up for everything they believe in – freedom, democracy, human rights and compassion for all mankind.

“All human beings want to live in peace, love and respect,” Ly said. “Without compassion, that is not possible.”

Ly knows what it’s like to have his personal freedoms taken away. The communists jailed him when he was a teenage monk teaching in a monastery in central Vietnam. Two of Ly’s escape attempts failed, but he succeeded the third time.

“Life under the communists was hard,” he said. “They threw me in a small jail cell with no food or water. They hit and kicked me.

“It was a good opportunity for me to practice Buddha’s teachings.”

Ly said he understood then that hating his tormentors would only cause him to live in misery.

“I needed to practice compassion to survive,” Ly said.

“Today, as we deal with wars and terrorism, it’s the same thing. If we want to survive, we need to practice compassion.”

The Dalai Lama’s teachings Saturday morning at the front steps of the temple will focus on the power of compassion.

For most Buddhists, the Dalai Lama is a “living, walking Buddha,” said Michelle Nguyen, who runs the Spiritual Center, a nondenominational, nonprofit organization in Garden Grove.

“He’s our master,” she said. “He speaks the language of compassion, which is a universal bond that connects all of humanity. His message particularly resonates with our community that has struggled with a lot of challenges over the years – fleeing from home, settling in a new country and making a future for our families.”

“We are truly blessed to have him come to our community.”

The 78-year-old Hanoi-born actress who has starred in “The Joy Luck Club” and as Hawkeye Pierce’s Korean girlfriend on the TV show “M.A.S.H,” wrote a note to the Tibetan leader. She asked for a meeting, introducing herself an an “exiled Vietnamese actress living in he U.S.”

A couple of days later, Kieu-Chinh found herself sipping tea with the Dalai Lama – talking about topics ranging from spiritualism to the pangs of living away from one’s homeland.

“The word ‘exiled’ must have caught his eye,” she said. “I felt so blessed and so connected with him. He even held my hand.”

The excitement in Little Saigon over the Dalai Lama’s visit is palpable.

“This is the first temple that is actually in Little Saigon. The fact that the Dalai Lama is going to inaugurate it is a big deal for us,” said Roxanne Chow, who hosts a show about public affairs on KVLA, a Vietnamese TV channel.

Chow says the reason the Dalai Lama is so special to locals goes beyond him being an exiled leader who also fled a communist regime.

“That bond will always be special, but it’s not the only thing,” she said. “The important thing for us is that he is a reincarnation of the 13th Dalai Lama. He is an embodiment of our Buddhist beliefs.”

Chow, who was raised Buddhist, converted to Christianity after marriage. But she still believes in karma and reincarnation. No matter what language you speak or where you come from, what goes around comes around, Chow said.