Alameda, CA (USA) -- Members of the Buddhist Temple of Alameda are celebrating the 100th anniversary of their autonomy this weekend. They have attended services here since 1906, the first 10 years or so as a branch of the Oakland Buddhist Church. By 1914 they were attending service in rented rooms at the former home of William T. S. Ryer at 2325 Pacific Ave. Ryer had built the Stick-Eastlake villa for his family in 1886. 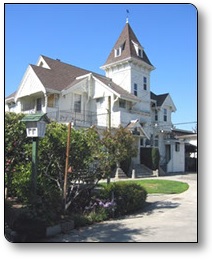 On Jan. 4, 1916, the temple came into its own as Ashi Bukkyokai. Three years later the Buddhists purchased Ryer’s villa to use as both a temple and a home for their minster and his family. The community thrived here through the 1920s and 1930s. The Buddhists built a kitchen and social hall to accommodate their growth. By 1936, the temple had so many members that records show that 560 children were attending Sunday school.

This all ended in with the Dec. 7, 1941, attack on Pearl Harbor. The following Feb. 19, President Franklin Roosevelt signed Executive Order 9066, which forced all Japanese-Americans, regardless of loyalty or citizenship, to evacuate the West Coast. By May 1942 Alameda’s thriving Japanese community was no more, their temple converted to a Navy school.

Japanese who had called Alameda home found their way to an assembly center hastily built on the site of the Tanforan Racetrack. Some went from living in their comfortable Alameda homes to existing in former horse stalls. By October most of those “assembled” at Tanforan boarded trains for “Central Utah Relocation Center” in Utah. Others went to centers on the Gila River or Poston, both in Arizona.

After the war, many of Alameda’s Japanese returned home, happy to find welcome at their former temple. In 1945 worship began anew. Over the years, the Buddhists built a garden and acquired the property that housed the Japanese language school. They razed the school, which stood at 2326 Buena Vista Ave. and, in its place, built an eight-unit apartment building.

The community continues to thrive and invites Alameda to join them this weekend. Celebrations begin on Saturday, Sept. 24, with an Ochigo procession at 9 a.m. followed by a centennial service at 10:15 a.m. On Sunday at 10 a.m. they will host an appreciation gathering and offer the premier showing of Our Second Home, a film about the Buddhist Temple of Alameda.