San Diego, CA (USA) -- A Buddhist fraternity that started at San Diego State University in 2015 is getting national attention from other schools and might open a chapter at UC San Diego next year. 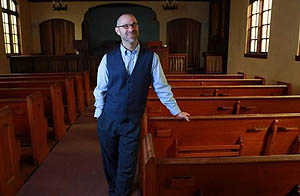 << Jeff Zlotnik, standing inside the vacant Swedenborgian Church in University Heights, is adviser to a Buddhist fraternity at San Diego State University. The fraternity may expand to other schools, and the Buddhist temple Zlotnik co-founded is in escrow to purchase the church. (Peggy Peattie)

Meanwhile, the Buddhist temple that helped start the fraternity itself is expanding and has hopes of moving into a vacant 1920s-era church in University Heights.

“I knew this would take off,” said Jeff Zlotnik, co-founder of the Dharma Bums Buddhist Temple in downtown San Diego and advisor to the Delta Beta Tau co-ed fraternity at SDSU.

Zlotnik, who was a member of Beta Theta Pi as a University of Arizona student, approached SDSU with the idea of the nation’s first Buddhist fraternity in fall of 2015. Some students at SDSU already attended meditation sessions at Dharma Bums Temple — the name comes from a Jack Kerouac book — which Zlotnik co-founded as a way for English-speaking Westerners to learn about Buddhism.

Students interested in the fraternity began meeting weekly at the school’s library in 2015, and the first pledge program started last spring.

The latest class of 17 pledges recently joined the fraternity, bringing the membership to 51.

“It was beautiful because the students this last semester really were more involved in running it,” Zlotnik said.

Members created their own initiation ritual for pledges, who must visit four Buddhist temples over a 10-week period to bond and become exposed to different cultures associated with Buddhism.

The excursions include trips to the Dharma Bums Temple, the Zen Center of San Diego in Pacific Beach, the Metta Forest Monastery in Valley Center and the Pao Fa Temple in Irvine, where students stay the night.

“I have never seen a program more effective in producing genuinely good people, ready to go out and spread their kindness in their communities and further the world around them,” student and frat member Evihn Vaszily wrote in a letter to SDSU administrators.

“I am certain that SDSU students who are a part of this community, and even those who are simply touched by it, will leave college ready to be incredibly positive representations of the university, in both contributions to the world around them and in the discipline they put into whatever practice they may pursue.”

While the fraternity is growing at SDSU, three members of Delta Beta Tau have been meeting with UC San Diego students who are interested in forming their own chapter.

Zlotnik used to speak to a Buddhist group at UC San Diego twice a year, but its membership has dwindled to just two students.

A Delta Beta Tau chapter at UC San Diego could be more sustainable than a Buddhism club, said Zlotnik, who anticipates approaching the administration with the idea of introducing the fraternity by the end of the year.

Zlotnik said he also has been contacted by people interested in started their own chapters in Florida, Chicago, New York and four other cities

He plans to look into getting a house for the Delta Beta Tau chapter at SDSU. For now, the group meets twice a week, once at SDSU and once at the shop Buddha for You. Wednesday meetings are open to the public and held at  8:30 p.m. in the Tehuanco Room of the Aztec Student Union.

Frat members and people who attend the Dhama Bums Temple are not necessarily Buddhists, but are interested in Buddhism and meditation, Zlotnik said. Religion and politics, in fact, are two things that are not discussed at meeting.

As the fraternity has grown, Zlotnik began searching for a new home for the Dhama Bums Temple, which he said had outgrown its home at 541 2nd Ave.

Late last year, he learned that the Swedenborgian Church on the corner of Campus and Tyler avenues in University Heights had closed.

The congregation had followed the teaching of 18th Century Christian mystic Emanuel Swedenborg, a Swedish scientist, philosopher and theologian, and the property is owned by the Swedenborg Foundation.

The church opened in 1927, and the attached Swedenborgian Hall had been used by theater groups and hosted various concerts and community meetings over several decades.

The foundation was asking $1.5 million for the building, and Zlotnik told his realtor that the Dharma Bums had $7,000.

Zlotnik made an offer of $1.4 million, and the foundation accepted. His realtor told him that a developer had made the same offer, but the foundation wanted the property to go to a spiritual organization.

Although the temple had never held a fundraiser before and doesn’t even ask for donations after meditation classes, Zlotnik began calling everyone from the temple to join the mission of getting a new home and saving a beautiful old church from demolition.

“I’ve had faith this whole time that this would come together,” Zlotnik said. “It’s part of my Buddhist practices. I don’t allow any space for negative thoughts.”

Donors noticed that the start of the fundraiser and the close of escrow was 108 days, an auspicious number in Buddhism, so many contributions were $108.

In another good sign, Zlotnik discovered that Buddhist scholar D.T. Suzuki wrote the book “Swedenborg: Buddha of the North” about the mystic followed by congregants of the old church.

Zlotnik had never heard of the book, but he knew Suzuki as the writer of “An Introduction to Zen Buddhism.” It was the first book he had read on Buddhism, and it changed his life.

“You can call this coincidence or call it fate, but it was just really beautiful,” he said.

Zlotnik is confident that if they raise enough for the down payment, the mortgage and expenses can be met with the support of people already donating to the temple, a gift shop planned in the church and rentals of three residential units that can house up to six in the church.

To learn more about the fund drive, visit http://www.dbtnewhome.com.
TOP