WAPATO, WA (USA) -- They carefully dismantled the altar, handmade in Japan, and stored it under the stage of the church gym. They sealed the church windows, locked the doors and gave the keys to friends who would keep watch for them. 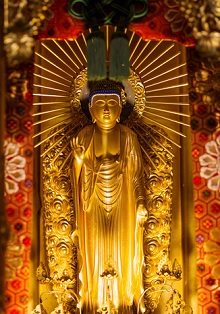 << The Amida Buddha of the Yakima Buddhist Church includes 48 bars, symbolizing rays of lights, that represent the 48 vows that the Amida Buddha makes in Becoming Buddha (Photo: Shawn Gust/Yakima Herald)

As the Japanese-American members of the Yakima Buddhist Church prepared to leave their homes for the Portland Assembly Center in early June 1942, they packed the practical items they would need: bedding and linens for each family member, toiletries and extra clothing, cutlery and dishware.

They took what they could carry, securely packaged, tied and marked with their names.

And in those final days before 1,017 Japanese-Americans from the Yakima Valley were forced to leave their homes, some were making final preparations for the most precious object they would take.

The small statue of the Amida Buddha — the heart of the inner altar almost from the church building’s beginnings in 1929 — first would accompany members to the Portland Livestock Exposition barns and stalls that would briefly serve as their homes. The small statue later would go on to comfort Buddhists living in dusty wooden barracks behind the barbed wire of the desolate Heart Mountain Relocation Center in Wyoming.

About 75 percent of the Japanese immigrants in the Yakima Valley followed the teachings of Buddha. As in Japan, the local Buddhist church was the social center as well as the religious focal point of community life. Their Amida Buddha would occupy one of four Buddhist churches at Heart Mountain.

Religion, during the incarceration, meant more than ever, Hiroko Terakawa Okawachi wrote in “The Buddhist Church Experience in the Camps, 1942-1945.”

“During the years of confinement, we needed Buddhism to help us keep faith ... that our future would be brighter,” she said.
Rapid growth

During a recent Sunday service, the lyrics of “When We See the Golden Sun” rang out as 17 people stood amid dark wooden pews. A father brought his two young daughters, both wearing dresses. Three women wore jeans.

Members dedicated the church in early 1930. They built it at 212 W. Second St. in Wapato “because of the greatest concentration of the membership living in that vicinity,” according to a church history.

Eddie Iseri, 88, lived near the church in Wapato as a young boy; his mother, Haruko, ran a grocery store and boarding house across the alley from the church gym and meeting hall. His father, Frank, had an 88-acre hop farm. Both born in the U.S., Iseri’s parents never spoke Japanese to him.

Raised speaking English, some younger Japanese-Americans joined the Methodist church, with services in English. Buddhist services were in Japanese.

They began building a gym and meeting hall, the Bussei Kaikan, in the fall of 1939. The church had several hundred members at that point.

The partially finished Bussei Kaikan was used as a United Service Organizations facility during the war and as a hostel for those returning to the Yakima Valley after Heart Mountain closed.

Only 13 when he and his family had to leave, Iseri wasn’t that involved with the church other than services, Sunday school and Japanese school, he said.

An aunt became a Christian but Iseri said he refused because of President Franklin Roosevelt, who signed Executive Order 9066 forcing all West Coast residents of Japanese ancestry into prison camps.

“FDR sent us to camp; he was a Christian,” Iseri said. “A true Christian wouldn’t do that.”
A delicate task

Dave Sakamoto offered a tour of the Wapato church a few days before more than 1,700 people filed into the gym over the course of several hours during the 56th annual Sukiyaki Dinner, the church’s major annual fundraising event on March 5.

As people came for sit-down and carryout meals, some quietly went to admire the Amida Buddha, portrayed with what resembles a halo comprised of 48 individual rays of light.

Those 48 slender spires on the Amida Buddha symbolize the 48 vows that Amida Buddha makes in becoming a Buddha, said the Rev. Donald Castro. He was the supervising minister for the Wapato church for the last several years before retiring Jan. 1.

“It’s so fragile with the rays of light,” Castro said of the statue, donated by Buntaro Matsumura and Jisuke Wada.

That would make transporting it safely, first to the livestock barns and then to Heart Mountain, even more daunting.

“They’re invariably made of wood with gold leaf,” noted Castro, who first began visiting the Wapato church when he started working in the Pacific Northwest in 1986.

So while such statues weren’t very heavy, those transporting the precious religious artifacts took utmost care to protect them. For example, when the reverend of a Los Angeles Buddhist temple was ordered to leave for a camp in Arizona, he took the Daishi (statue of spiritual leader) from its shrine and wrapped it in a new bedsheet.

But no one alive today witnessed the preparations to transport the statue to Heart Mountain and back. No one alive today saw it taken there and brought safely back to its golden inner altar in Wapato in 1945.

Because only about 10 percent of the Yakima Valley’s Japanese-Americans returned to the area, the church never regained the membership it had before the war. And while membership has dwindled, new visitors continue to come to services as others are drawn to Buddhism.

Despite its small numbers, the Yakima Buddhist Church endures. And favorite traditions such as the sukiyaki dinner, always held on the first Sunday in March, continue.

Members of the Sukiyaki Dinner Committee recently distributed letters thanking others for their help. More than 200 volunteered.

“We are proud to have such caring, hardworking, tireless volunteers and a community that is willing to graciously support our event,” the letter said.

“What a true display of the interdependence and interconnectedness of our community.”
TOP