Hailey, Idaho (USA) -- The terms “quiet” and “10,000 children” in the same place at the same time almost seems like an oxymoron. Yet, I could have heard a pin drop on the Wood River High School football field Monday as His Holiness the 14th Dalai Lama entered to speak to the children of Idaho. The children (and adults) in  attendance offered a quiet respect which was incredible. It seems that all persons there were ready to receive the Dalai Lama’s universal message of peace and compassion. 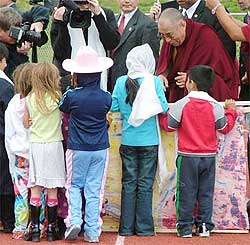 The Dalai Lama seemed to be genuinely delighted to be in the presence of the children. His pathway into the stadium was lined with children holding signs. He greeted them each with a respectful bow, touch of the hand, or kind words. He appeared to be oblivious to the drizzle of rain coming down and totally focused on the children.

Though the Dalai Lama is a leader of Buddhism, his message was one of universal love and compassion. He told the children that when he was a child, he played “fighting games” sometimes, and this is all right. He stressed, however, that fighting games are not part of the deeper, basic human nature. He said, “Basic human nature loves peace, love, more gentleness, more compassion.” The Dalai Lama told the children to respect the rights and views of others and to settle differences through dialogue. He said, “In reality, we have to respect others’ views. There is no victory for one side.”

The Dalai Lama said, “Young people are the shapers of the new planet. We are ready to turn responsibility over to you, the young.” After a violent 20th century, his message is for one of peace and compassion through dialogue for the 21st century.

In addition to the address to the children, the Dalai Lama also gave a Healing Address to the 10,000 people lucky enough to get a ticket. This address was televised live on CNN. His Holiness stated that after a most violent 20th century in which over 200 million people had been killed, now is the beginning of the century of compassion and of loving kindness.

He asked each and every person there to be more compassionate, starting now, to war less, fight less, and follow a path of altruism. The Dalai Lama stated that when a person follows a more compassionate path, the greatest benefit is to that person. The benefit comes through a more peaceful, calm mind which brings better sleep, better digestion, better general health, and a happier life. This causes a ripple effect out into society and the world is a better place for it. The Dalai Lama stresses that compassion is not a religious issue, but a human issue. From birth, it is the seed of a precious inner value leading to a happier life.

In addressing the survivors of the 9-11 attacks and Katrina, the Dalai Lama offered hope and determination. In speaking of his native country, Tibet, he stated that he has been a refugee for 46 years, having his government in exile in India. This is very sad. He stressed the importance of always keeping our spirit and hope. “Do not lose hope and determination,” he said. “Do not lose self respect and self-confidence. We can rebuild home and community.”

In general, the Dalai Lama stresses respect for others, compassion for others, maintaining a clear mind through meditation, prayer, and deep thinking. These will be the pathway to a better tomorrow. He says, “Not easy, but no alternative.”