San Francisco, USA -- Seeking points of intersection between Buddhism and neuroscience, the Dalai Lama, religious scholars and neuroscientists gathered at Stanford University on Saturday to discuss how they might learn from one another and work together toward alleviating human suffering. 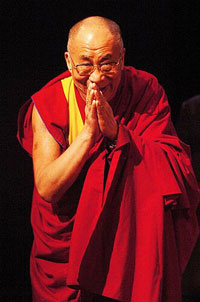 One of Buddhism's most important precepts is investigation in order to understand the nature of reality, the 14th Dalai Lama -- the spiritual and religious leader of Tibetan Buddhism -- said in opening remarks.

Throughout the day, he displayed an intense curiosity about neuroscience and its theories on the topics of the day: craving and human suffering.

During the sold-out, all-day symposium before 1,700 people, the Dalai Lama sat cross-legged on a regal, red chair, listening intently, and asking questions that drew praise for their sophistication from William Mobley, director of Stanford's Neuroscience Institute.

Buddhism emphasizes gaining insight through contemplation and meditation, while neuroscience focuses on observation and experimentation. But in seeking commonalties, the symposium aimed to identify what the two might offer each other.

The neuroscientist panelists grew excited about using understandings from the 2,500-year-old practices of Buddhism to better inform experiments on craving, compassion and pain. They spoke of exploring how meditation can alter responses of the brain to pain. In addition, they noted that even limited training in meditation helps people with anxiety disorders break out of abusive thinking patterns.

Both the neuroscientists and the Buddhists noted that science probably has some catching up to do. In one exchange, the Dalai Lama pointed out that Buddhism distinguishes between different types of compassion.

The neuroscientists then said that the experiments did not distinguish between compassion for people in an inner circle of friends and family versus compassion for everyone else. Incorporating the difference would more clearly define the experiment, they said.
It was the wife of Dr. Philip Pizzo, dean of the Stanford School of Medicine, who initiated the dialog.

According to an article in Stanford's School of Medicine magazine, after a car crash that left her unable to write, Pizzo's wife began reading and studying the Dalai Lama's teachings. She liked the idea that one can alter one's perspective in challenging situations.

After taking a class, she and her teacher, an exile from Tibet, wrote a letter inviting the Dalai Lama to Stanford.

The Dalai Lama has long taken an interest in science.

In his book, "The Universe in a Single Atom," published this year, he writes of a fascination with technology and science that began at an early age. Finding a pocket watch and film projector from his predecessor, he took them apart so that he could put them back together again. In his travels around the world, the Dalai Lama has had many meetings with scientists as he tries to lessen the gap between science and spirituality.
On this tour of the United States, the Dalai Lama will also speak before the Society for Neuroscience in Washington, D.C. Some neuroscientists have questioned the appropriateness of the discourse, saying experiments looking at brain images of Buddhist monks do not meet the high standards of scientific inquiry.

But in his introductory and closing remarks for the symposium, the medical school dean struck a somewhat defiant tone. He noted that there is presently a strong anti-science movement in this country.

Questions about Buddhism and its relevance to the scientific discourse are also disturbing, he said.

"My hope is that you will all go out to be ambassadors for further discussion," Pizzo said to the symposium audience at the end of the day. "We are divided into red states and blue states, theocracies and democracies. ... It is a tolerance for each other that will help us preserve the world that each of us must live in."