Buddhism as an education in capitalism

Columbia University professor draws a comparison between the religion and the economic system at library speaker series. 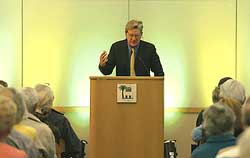 Thurman is the third in a series of lecturers to be featured in the 9th annual Distinguished Speakers Lecture Series, held at the Newport Beach Public Library.

To start off, Thurman offered his explanations of capitalism and Buddhism. Thurman, a dynamic storyteller, told the audience about Buddha, a young man who gave up a life of wealth and riches to search for the meaning of life.

To share his enlightenment with the world, Buddha started an education system to help people find understanding. The merchant class, the capitalists, were big supporters of Buddha's educational system, Thurman said.

"It was the merchant class who realized you could make yourself, be a self-made person," Thurman said.

Buddha literally means someone who has awoken from ignorance, Thurman said.

"What it really is is an education movement, Buddhism," Thurman said.

The world is on the edge of the greatest wave of capitalism, and the only way to approach that is for the wealthy to learn how to give, Thurman said.

"Clearly now, the only solution at this time is transcendent generosity," Thurman said.

In 1962, Thurman became the first American to be ordained as a Tibetan Buddhist Monk, according to the library foundation. He is now a professor in the religion department at Columbia University in New York City.

After 40 years studying Buddhism, Thurman said he still hasn't reached the enlightened state of understanding everything.

"We are not hopeless, each one of us, even the slightest thing we do improves the world," Thurman said.

Thurman and the other speakers were chosen by the library's volunteer committee, said Tracy Keys, executive director of the Newport Beach Public Library Foundation.

"There's a real hunger for this in the community," Keys said.

The series has drawn nearly sell-out crowds to each event. "It's been very, very positive," Keys said.