San Francisco, USA -- Referring to himself as one of the "defenders of Islam," the Dalai Lama, the world's most influential Buddhist leader, urged an interfaith gathering in San Francisco on Saturday to promote a pluralistic view of religion. 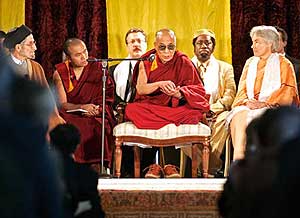 <<  The Dalai Lama speaks on the need for tolerance and understanding of Islam at the Mark Hopkins Hotel. Chronicle photo by Michael Macor

The Nobel Peace Prize winner said that the era of "one truth, one religion" was reserved for ancient times in which many of the world's religions were founded. But not today.

The Dalai Lama said all believers need to learn understanding for other faiths -- particularly for Islam, because, he noted, oil from the Middle East fuels economies around the world.

"In terms of community, in terms of humanity, the concept of several truths, several religions is very relevant,'' he said.

The Dalai Lama had joined many of the nation's Muslim scholars and leaders in trying to recast the image of Islam, which he believes has been wrongly demonized in America.

In many ways, they were preaching to the converted. The invitation-only event at the Intercontinental Mark Hopkins Hotel included roughly 500 audience members drawn from the same religious and scholarly communities that hosted the event.

"Nowadays, to some people, the Muslim tradition appears different, more militant," the Dalai Lama said. "I feel that's wrong. Muslims, like any of the major traditions, have the same message, the same practice. That is a practice of compassion."

The Dalai Lama also met privately with Muslim leaders, urging them to promote respect for other faiths within their own communities across the nation, said Sayyid M. Syeed, secretary general for the Islamic Society of North America, the most powerful Muslim institution in the nation.

Syeed said it was a message Muslim leaders already believed as a matter of faith. The Quran, which represents the divine teachings revealed to the prophet Muhammad, instructs Muslims that humanity would consist of people of only one faith if it had been so deemed by Allah, the Islamic word for God.

The Quranic verse, Syeed and others at the gathering said, instructs that a diversity of faiths ought to encourage believers to do good within their own systems.

"They will have to look to their own religion," Syeed said.

The message of looking to one's own faith to find unity with others was frequently invoked Saturday.

The Rev. Alan Jones, dean of Grace Cathedral, an Episcopal church, said that even during the holiest week of the Christian calendar, the gathering was helping him "to discover a little more of what it means to be a Christian."

And there was also an acknowledgement that Islam is undergoing dramatic changes.

Sheikh Hamza Yusuf, a popular voice for Muslims in America, said the world's major religions are struggling with modernity -- but none more so than Islam.

Yusuf said the challenges before the world demand that people of all faiths reach out to others.

"The essence of pain and suffering in this world is ignorance,'' said Yusuf, co-founder of the Hayward-based Zaytuna Institute, an Islamic think tank. "We can no longer ignore each other as faith-based communities."

The interfaith message is common in the Bay Area. And this selective audience was primed. Yet several audience members said they came away changed by the messages they heard -- particularly from the Muslim speakers.

"I always felt there was too little coming out from the Muslim community and not capturing the essence of what makes their religion beautiful, compassionate," said Gil Magilen, 62, who is Jewish.

For him, hearing the messages of Muslim speakers affirmed that "our differences are merely different routes toward the same goal: respect for everybody."

Organizers of the event, "A Gathering of Hearts Illuminating Compassion," had also been concerned that religion has become more of a political tool than a spiritual practice.

Continuing that theme, the Dalai Lama concluded the event with a five-minute meditation.

The gathering was organized by a volunteer group of individuals and several organizations, including the Myers Group, Fons Vitae, the Kirlin Foundation, the Islamic Society of California and the Zaytuna Institute.