SAN FRANCISCO, USA -- Prominent Muslim dignitaries on April 16, 2006 met for the first time with the world's most influential Buddhist, the Dalai Lama, enlisting his help in quelling fanatical ideologies within Islamic communities and improving the faith's declining image in the West. 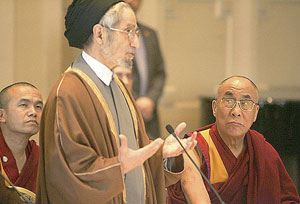 << THINKING GLOBALLY: The Dalai Lama, right, listens to Imam Mehdi Khorasani of the Islamic Society of California during a discussion of ways to promote understanding and lessen religious intolerance among Muslims and people of other religious faiths.
(Genaro Molina / LAT)

The summit was a measure of the desperate concern among moderate Muslim leaders and scholars about religious extremism and increasingly negative views of their faith arising from Western concerns about terrorism. Indeed, Islam traditionally has not recognized Buddhism.

"The main issue of this conference is to provide a platform to teach that there is no room today to say or invest in anything but love," said Imam Mehdi Khorasani of Marin County, who had extended the invitation to the Dalai Lama. "We are happy and grateful for His Holiness' decision to lend his energy to this cause."

Appearing comfortable and jovial in his maroon and saffron robe before a crowd of about 600, the Dalai Lama, 71, was true to his image as one of the world's most avid advocates for peace.

"Some people have an impression that Islam is militant," he said, seated in lotus position on a center-stage baronial chair at the InterContinental Mark Hopkins hotel. "I think that is totally wrong. Islam is one of the world's great religions and it carries, basically, a message of love and compassion."

He pointed to his homeland of Tibet as an example of a place where Buddhists and Muslims have existed together in peace for centuries.

In an interview earlier, the Nobel laureate and religious leader of Tibetan Buddhism said, "Promoting the genuine message of Islam and the proper impression of the Muslim world — that is my hope.

"Some of my Muslim friends have told me that those people who claim to be Muslims, if they create bloodshed, that is not genuine Islam," he said. "Those few mischievous ones do not represent the whole Muslim community."

Some of those in attendance suggested that the open display of mutual support might not play well with more extreme members of either Islam or Buddhism.

"It's a brave thing for imams to reach out to the Dalai Lama — it's likely to be seen in some circles as an act of weakness and undignified of their own traditions," said Caner Dagli, assistant professor of religion at Roanoke College in Salem, Va.

"The Dalai Lama is also putting himself out on a limb by standing with his Muslim brothers and sisters," he said. "But I'm happy about all that. It's right that they should be allies."

One difference is that although the Dalai Lama holds an unquestioned position as spiritual and temporal leader of Tibet, Islam has no similar central authority uniting its members. Hence, Muslims around the globe interpret the faith quite differently and are more divided among themselves.

That the meeting came together at all was remarkable, coming near the date of the prophet Muhammad's birthday, as well as during Passover and Easter weekend. It also followed the release last week of the recorded sounds of struggle and panic when Sept. 11 hijackers took control of United Airlines Flight 93 and screamed, "Allah is the greatest," as the plane went down.

But the Dalai Lama, who normally books his appearances seven years in advance, and the Muslim leaders and scholars from around the world broke their holiday commitments to attend the hastily organized event.

"This meeting had to happen," said Dan Kranzler, a philanthropist and one of the gathering's sponsors.

"The 90% of the Muslim world that is moderate and peace-loving wants to overcome the radical ideologies of the rest," said Kranzler, who is Jewish but refers to himself as a "universalist." "If there is anyone in the world who can cheat the odds and make that happen it's the Dalai Lama."

Organizers called it an extraordinary convergence.

Essentially, Muslim leaders were seeking the Dalai Lama's rock-star status, broad appeal and skills as a neutral conciliator in dealing with divisiveness within their faith, deepened by worldwide media attention. Even moderate Muslims, who make up most believers, are not united enough to impose their visions of peace and tolerance on those who are intolerant or promote violence.

Shaykh Hamza Yusuf, founder of the Zaytuna Institute in Hayward, which is dedicated to reviving the sciences of classical Islam, pointed out another reason for wanting the Dalai Lama on their side.

"Buddhism gets the best press of any religion in the world," he said. "Islam gets the worst press because it's associated with war and belligerence.

"When a recent Gallup Poll asked Americans what they respected about Islam, 38% answered not a thing, and 12 % said they weren't sure," he said. "Yet one-fifth of humanity is Muslim.

"So we are delighted that the Dalai Lama wants to understand how we view this situation and assess what his own community can do to alleviate the problems," he said.

Under tight security, the Dalai Lama initially met privately with 40 leaders, including Mahmud Kilic, a professor of Sufism and president of the Turkish and Islamic Art Museum in Istanbul; Sayyid M. Syeed, head of the Islamic Society of North America, the largest umbrella organization of Islamic centers in the United States; and Ahmad Al-Hashimi, president of the Ihsan Muslim Heritage Society of Ontario, Canada.

One proposal that emerged from the discussions was a possible visit by the Dalai Lama to Saudi Arabia.

Later, on stage, he was flanked by religious leaders and scholars including Huston Smith, emeritus professor of religion at UC Berkeley; Thomas Cleary, a Harvard professor whose interpretation of the ancient Chinese "Art of War" became a bestseller; and Robert Thurman, a Columbia University professor known as the Billy Graham of Buddhism.

In an interview, Smith said the meeting was in direct response to the violent exploitation of one of the great traditions.

"The world is in flames. We are at war with Islam," he said. "The Muslim leaders here wanted to talk to the Dalai Lama about what they could do to persuade terrorists that their terrorism only increases terrorism."

Though Muslim leaders called for the gathering, it was organized and funded by a coalition that included film producer Steven Reuther and Kranzler, who made his fortune in the computer software industry.

In an effort to make Muslim guests feel as comfortable as possible in their daily prayers, the organizing team determined the exact direction of Mecca from the Nob Hill hotel — 15 degrees east of north. Receptions were alcohol-free and vegetarian, in keeping with practices of Islam and Buddhism. Dozens of participants wore white scarfs that had been draped around their necks by the Dalai Lama in private sessions.