At One With Dual Devotion

`JuBus' blend the communal rituals of Judaism with the quiet solitude of Buddhism. Most adherents are at peace with the paradox.

Los Angeles, CA (USA) -- The altar in Becca Topol's living room carries a statue of Buddha and a garden stone painted with the Hebrew word for peace, shalom. In April she celebrated Passover with a "Zen Seder" feast that opened with a modified Haggada narrative comparing Israel's exodus from Egypt to Buddha's liberation from suffering. 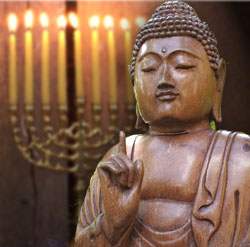 "I'm a Jewish Buddhist - a JuBu," said Topol, 37. "My Buddhist practice has actually made me a stronger Jew."

While Buddhism has enriched Topol's Judaism — giving her a deeper sense of spirituality — it has produced confusion in fellow JuBu David Grotell. Grotell, 41, is so worried about breaking Judaism's ban against idol worship that "although I have a meditation spot in my home, as a Jew, I just can't allow myself to put a statue of Buddha there."

Grotell's conundrum and Topol's confidence show how diverse the JuBu experience can be — even inside one Zen Buddhist center in Santa Monica. They also underline how a new, American hybrid of Buddhism is blossoming, fed by a large representation of Jewish practitioners.

No one knows for certain how many JuBus there are; the last surveys were conducted in the 1970s. A large majority of the 3 million Buddhists in the United States are Asian, but by some estimates, at least 30% of all newcomers to Buddhism are Jewish. (By comparison, U.S. Jews number 6 million.)

Alan Lew, who studied Buddhism for a decade before changing course to become a rabbi, calls the paradoxical blend of Judaism, which bows to one God, and Buddhism, which has no supreme being, "a fruitful and beautifully creative meeting of two religious streams that came together in the United States."

"Most people don't go very far into Buddhism; they just want to feel a little better," said Michael Shiffman, founder of L.A. Dharma, a nonsectarian Buddhist organization in Los Angeles. "But can you be Jewish and not believe in God? Good question."

Others, however, would say it all depends on an individual's definition of God.

Essentially, Buddhism creates a solitary and quiet path away from suffering and toward a moral life based on an all-inclusive vision of interconnectedness, wisdom and compassion. A method for achieving that awareness is daily meditation. Being nondogmatic, Buddhism does not require that adherents join anything or reject anything — even the notion of God.

So in this regard it differs vastly from Judaism, a community-based tradition that relies on observances, laws and prayers such as the mourner's kaddish — the prayer for the dead — to connect adherents with a personal god.

So what is that Jews find so attractive about Buddhism?

"Suffering is at the heart of the matter," suggested David Gottlieb, whose autobiographical book "Letters to a Buddhist Jew" examines the life of a "Zen Jew" struggling to resolve his two identities. "Judaism, at its best, embraces suffering and, at its worst, enshrines it. Buddhism explicitly seeks to end suffering, and doesn't look to the past."

Lee Rosenthal, 59, of San Diego found that powerfully appealing. He'd just returned from the Vietnam War and was facing the deaths of his two children shortly after they were born, and then his wife's cancer.

"I couldn't buy into the spiritual answers I was getting from people for why my little babies passed away," he recalled. "But I picked up a book on Buddhism and it spoke to me, streetwise and honest."

"Instead of sugar-coating things, it gave me a plain explanation for why I was suffering — life is painful and difficult," he said. "It said also you can't run away from it. Deal with it."

Rosenthal went on to become a Buddhist priest, which his mother, Rosalie, came to terms with a few years ago in a poignant meeting.

"My mother has Alzheimer's disease and thinks I'm a kid who lived down the street from us in the 1950s," he said. "So one day I asked her, 'Rosalie, how's your son Lee doing?' She sat up straight in her wheelchair and with a proud look in her eye said, 'He's a Buddhist priest.' "