A 'meeting of two religious streams'

Blend of Judaism, Buddhism creating harmony for some, confusion for others

Los Angeles, CA (USA) -- The altar in Becca Topol's living room carries a statue of Buddha and a garden stone painted with the Hebrew word for peace, "shalom." 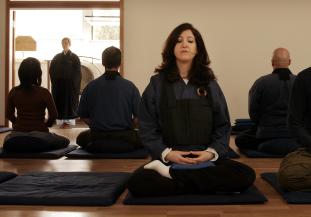 In April she celebrated Passover with a "Zen Seder" feast that opened with a modified Haggada narrative comparing Israel's exodus from Egypt to Buddha's liberation from suffering.

"I'm a Jewish Buddhist — a JuBu," said Topol, 37. "My Buddhist practice has actually made me a stronger Jew."

While Buddhism has enriched Topol's Judaism — giving her a deeper sense of spirituality, she says — it has produced confusion in fellow Jubu David Grotell. Grotell, 41, is so worried about breaking Judaism's ban against idol worship that "although I have a meditation spot in my home, as a Jew I just can't allow myself to put a statue of Buddha there."

Grotell's conundrum and Topol's confidence show how diverse the JuBu experience can be, even inside one Zen Buddhist center in Santa Monica, Calif. It also underlines how a new, American hybrid of Buddhism is blossoming, fed by a large representation of Jewish practitioners.

No one knows for certain how many JuBus there are; the last surveys were conducted in the 1970s. A large majority of the 3 million Buddhists in the United States are Asian, but by some estimates at least 30 percent of all newcomers to Buddhism are Jewish. (By comparison, U.S. Jews number 6 million.)

Alan Lew, who studied Buddhism for a decade before changing course to become a rabbi, calls the paradoxical blend of Judaism, which bows to one God, and Buddhism, which has no supreme being, "a fruitful and beautifully creative meeting of two religious streams that came together in the United States."

"Most people don't go very far into Buddhism; they just want to feel a little better," said Michael Shiffman, founder of L.A. Dharma, a nonsectarian Buddhist organization in Los Angeles. "But can you be Jewish and not believe in God? Good question."

Others, however, would say it all depends on an individual's definition of God.

Essentially, Buddhism creates a solitary and quiet path away from suffering and toward a moral life based on an all-inclusive vision of interconnectedness, wisdom and compassion. A method for achieving that awareness is daily meditation.

Being nondogmatic, Buddhism does not require that adherents join anything or reject anything — even the notion of God.

So in this regard it differs vastly from Judaism, a community-based tradition that relies on observances, laws and prayers such as the mourner's kaddish — the prayer for the dead — to connect adherents with a personal god.

So what is it that Jews find so attractive about Buddhism?

"Suffering is at the heart of the matter," suggested David Gottlieb, whose autobiographical book Letters to a Buddhist Jew examines the life of a "Zen Jew" struggling to resolve his two identities. "Judaism, at its best, embraces suffering and, at its worst, enshrines it. Buddhism explicitly seeks to end suffering and doesn't look to the past."

Lee Rosenthal, 59, of San Diego found that powerfully appealing. He'd just returned from the Vietnam War and was facing the deaths of his two children shortly after they were born, and then his wife's cancer.

"I couldn't buy into the spiritual answers I was getting from people for why my little babies passed away," he recalled. "But I picked up a book on Buddhism and it spoke to me, streetwise and honest."

"Instead of sugarcoating things, it gave me a plain explanation for why I was suffering: Life is painful and difficult," he said. "It said also you can't run away from it. Deal with it."

Rosenthal went on to become a Buddhist priest, which his mother, Rosalie, came to terms with a few years ago in a poignant meeting.

"My mother has Alzheimer's disease and thinks I'm a kid who lived down the street from us in the 1950s," he said. "So one day I asked her, 'Rosalie, how's your son Lee doing?' She sat up straight in her wheelchair and with a proud look in her eye said, 'He's a Buddhist priest.' "

A majority of JuBus, as they call themselves, are baby boomers who were raised in loosely religious families and began to feel unfulfilled in the tumultuous and experimental 1960s and '70s. They joined the legions of other young men and women searching for spiritual nourishment and ended up turning to Buddhism, a welcoming meditative practice devoid of the cultural stigmas contained in, say, Christianity or Islam.

And many, like Alan Senauke, now a Buddhist priest in the San Francisco Bay Area, discovered the two traditions combined easily, almost on their own.

Although he no longer celebrates Jewish holy days, with the exception of Passover, Senauke said, "My Judaism and Buddhism are like vines so entangled they are not separate."

"Because of my Jewishness, I'm faulty as a Buddhist, and because of my Buddhism, I can never really be a practicing Jew," he said. With a smile, he added: "I'm comfortable with that."

"Look at it this way," said Senauke, who is also a noted bluegrass guitarist. "I've been playing Southern music for 45 years, but I'll never be a Southerner. I'm a New York Jewish boy. But this is my music, it resonates in my heart, and I play it as authentically as I can."

The boom in Buddhism has left some Jewish leaders wondering how they could better serve their people.

"I'm encouraged that people want to find something more spiritual," said Rabbi Bentzion Kravitz of a group called Jews for Judaism. "But I'm also disillusioned that they have not found it in Judaism. Maybe we haven't done a good enough job of making Jewish mysticism accessible to the masses."

But Marc Lieberman, a San Francisco ophthalmologist who helped arrange a historic dialogue between Jewish leaders and the Dalai Lama in 1989, calls the JuBu phenomenon a fine example of "good old American innovation."

"I'm a healthy mosaic of Judaism and Buddhism," Lieberman said. "Is that fair to either religion? Fair schmair! It's what I am.

"My Jewish side is a tribal sensibility, a reflexive identity with the pain and agony of my people and the pride and glories of their traditions," he said. "But my Buddhist side asks, 'Does that exclude others in the world?' "

How all those clashing religious notions affect JuBus is illustrated in the paths taken by Lew and his lifelong chum Norman Fischer. In the 1970s, they lived in Buddhist monasteries and studied under Berkeley Zen master Sojun Mel Weitsman, an ethnic Jew.

Their friends figured that Lew, a freewheeling intellectual, would become a Buddhist priest, and Fischer, who was always a studious rabbi's pet, would become a rabbinical scholar.

Instead, the opposite happened. But their theologically competing spiritual realms have acquired a lot of the curlicues and ambiguities that are characteristic of JuBus.

Lew, for example, said, "I don't believe one can be both Jewish and Buddhist; your central commitment should be clear.

"Personally, my roots are more Buddhist than Jewish, but my spiritual practice is Jewish."

He also firmly believes in God.

But Fischer, a high-ranking Buddhist priest whose first name is now Zoketsu, suggested that a "person can be a faithful Jew and practice Buddhism."

Topol would tend to agree with Fischer.

Six years of Buddhist training at the Santa Monica Zen Center, where reconciling with one's religion of origin is emphasized, has only deepened her appreciation and respect for her Jewish roots.

"I've found that Buddhism has broken apart my fixed beliefs and notions," she said, "so that I can approach Judaism with a fresh eye."

For Topol, that means viewing biblical descriptions of God's active presence in human affairs not as literal history but as meditation tools and spiritual instructions for coping with daily life.

Rising from a meditation pillow after a Sunday-morning Buddhist service, Topol said, "I even look at the writings of the Old Testament, such as Moses' conversations with God, as Zen koans; that is, as questions and statements to be used as meditation disciplines along the lines of 'What is the sound of one hand clapping?' "

What happens next is anyone's guess. But some JuBus are predicting the emergence of a unique American-style Buddhism.

"Jews value education, hard work, innovation and strong commitment to family, all of which they are bringing to American Buddhism," said Charles S. Prebish, a professor of religious studies at Penn State University. "What you get is some kind of a hybrid."