Maui tower being built for visit by Dalai Lama

PAIA, Maui (USA) -- In a modest residential neighborhood in the former sugar plantation town of Paia, workers are building a sacred tower in preparation for the two-day visit of Tibetan Buddhist leader the Dalai Lama Tenzin Gyatso. 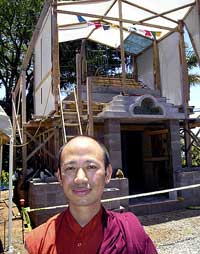 << GARY T. KUBOTA
The Maui Dharma Center in Paia is building a Tibetan Buddhist sacred tower, or stupa, ahead of a visit by the Dalai Lama. Lama Gyaltsen Tamang is supervising the project.

"We feel very, very happy to have him come to visit to give a good message for all," said Lama Gyaltsen Tamang, leader of the Maui Dharma Center.

The Dalai Lama has visited Oahu and the Big Island twice but never Maui, and his consecration of the sacred tower, or stupa, will mark a milestone in the center's efforts to establish roots on the Valley Isle.

The Dalai Lama plans to visit the Maui Dharma Center on April 24-25.

Lama Gyaltsen said a committee is working on details of the Dalai Lama's visit.

The visit is being co-hosted by the center, the Tibetan Cultural Conservancy of Maui and Aloha Friends of Compassion.

Since he uprooted himself from Tibet in 1959 following a Communist Chinese takeover, the Dalai Lama has established a government in exile in India. He and other exiled Tibetan Buddhists have developed religious centers around the world, including the center on Maui, which was founded in 1974.

Tibetan Buddhism is inclusive in nature and recognizes that people have differing attitudes and backgrounds and that the path to spirituality might be achieved through teachings and practices of non-Buddhist religions.

The more than 100 members of the center include a wide range of people, including U.S. citizens who have studied Tibetan Buddhism in India and Europeans who visit Maui regularly.

Members say the Dalai Lama's visit will fulfill a wish of the center's first full-time teacher, the late Lama Tenzin, who regularly requested a visit of the Dalai Lama to the Valley Isle.

The Lha Bab Stupa, dedicated to Lama Tenzin, who died in 2001, will be a sacred spiritual monument and an architectural expression of the teachings of Buddha of wisdom, compassion and harmony, members say.

The historical Buddha lived some 2,500 years ago in India, and many of the ancient stupas remain today in a number of countries, including India, Nepal, Tibet, Burma and Thailand.

Once completed, the stupa will be 27 feet tall and include an indoor base with a prayer wheel and a middle chamber to hold relics.

Members are also making miniature clay shrines, or "tsa-tsas," that will be placed in the stupa along with handmade tiny prayer scrolls, or "zung."

Meditative prayers are said as the members make the tsa-tsas to imbue them with positive feelings.

Members say the existence of holy objects is to transform the mind and to be able to realize the path toward enlightenment.

Lama Gyaltsen, who is supervising the building project, said the stupa itself represents various aspects of the Buddha, including the upside-down bowl in the middle tier which symbolizes the impermanence of the world and a state of emptiness that allows increased consciousness.

The rings at the top of the stupa represent levels of an enlightened being.

Lama Gyaltsen said the spine of the stupa is being carved out of a cypress tree that once grew in Kanaio, and the top of the stupa with the sun and moon ornament are being made of special gold and copper alloy in Lhasa, Tibet.