It says the city is unconstitutionally keeping it from worship at a site it owns. The city calls it a zoning and nuisance issue.

Los Angeles, USA -- A Vietnamese Buddhist congregation sued Garden Grove on Wednesday for the right to worship at the site of a former medical building, saying city leaders had unfairly barred it from holding services and from building a temple on the property. 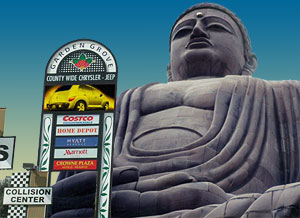 The suit, filed in U.S. District Court in Santa Ana by the American Civil Liberties Union on behalf of the Quan Am Temple, says the city has violated the congregation's constitutional rights by refusing to allow services for years at the one-story building at 10510 Chapman Ave.

"We just want a place to practice our religion," said Thich Dao Quang, the temple's abbot, through a translator. He said the congregation, after repeated rejections from the city, had no choice but to sue.

"We are extremely saddened, having to take this step," he said.

The abbot, who fled Vietnam after the government seized his temple there two decades ago, opened the Quan Am Temple in a Garden Grove house in 1999. As the congregation grew, neighbors complained of traffic and noise, drawing threats of action from code enforcement officials.

The congregation bought the 1.8-acre former medical center in 2004, but the city prohibited services there after neighbors again complained of traffic and noise.

Last year, the city's Planning Commission rejected the congregation's request to build a 15,500-square-foot temple on the site, which is zoned for office use, a decision upheld by the City Council. This year, the council also rejected a scaled-down plan for the temple, saying it would clash with the "spirit and intent" of the surrounding residential neighborhood.

Belinda Helzer, an attorney with the ACLU, said that kind of city discretion is prohibited by a federal law passed in 2000, the Religious Land Use and Institutionalized Persons Act. It prohibits the government from employing land-use regulations to impose a "substantial burden" on religious practice.

The temple is "not allowed to do anything here," Helzer said. "They're scared of citations. They're scared they'll be prosecuted criminally."

The lawsuit requests an immediate order allowing congregants to worship there, and ultimately permission to build the temple. Helzer said the city's zoning code is unconstitutional because it places more requirements on religious groups than it does on secular ones such as the Boys & Girls Club near the temple's property.

Helzer said the temple was barely able to pay its electric bill, much less fulfill its goal of helping the poor, because congregants were not attending services — and therefore not donating — for fear of city reprisal. The congregation has 15 monks and nuns, plus 250 to 600 congregants.

She said the temple had tried to reduce traffic by offering shuttle service to congregants, and had offered to pay property taxes, even though religious groups are exempt. She said the lawsuit was a last resort for the abbot.

"He doesn't want conflict," she said. "He wants to live in harmony with other human beings."

Vien Nguyen, 41, of Newport Beach said the temple serves as an anchor for her extended family of aunts, uncles and cousins. She said her grandmother's ashes are kept in the temple, but she has not been able to bring her family to pay respects.

"Our spiritual gathering place has been taken away from us," she said. "We've been asked by the abbot not to come and put the temple at risk."

Neighbors are divided on whether they wanted the Buddhists on their block.

"We don't bother them, and they don't bother us," said Patricia Granath, 70, who lives across the street. "I've got no complaints against them."

But Var Kay, 77, who lives down the block and is a Buddhist himself, complained of the traffic and said the temple caused more noise than a nearby hospital.

"It's better if there is no temple there," he said.

Fertal, who was surprised to learn from a reporter Wednesday that he was named in the suit, said the city rejected the temple's plans primarily because neighbors complained about traffic, parking and noise.

"I think at the end of the day, the reaction by the residents and their concerns was fairly compelling in terms of 'Is this an appropriate use at this location?' We have several temples in town, so it's not as if we are trying to discriminate against temples."

Congregants of the Quan Am Temple say they have a special reverence for their 76-year-old abbot. They point to his religious devotion and speak of the time pirates beat him unconscious when he tried to prevent the rape of female passengers on a boat fleeing Vietnam.

In an interview with The Times, the abbot said that incident occurred in 1986, during one of his 12 attempts to escape Vietnam after the government confiscated his temple.

He said he arrived in the United States in 1988 and loves the country for its religious freedom; thus the decision to sue was a painful one.

"Our church has been financially crippled because the lay followers cannot come and practice," he said through a translator. "And that's the source of income."