Los Angeles, USA -- Led by Sharon Stone and Goldie Hawn, the Hollywood power crowd turned out to hear words of wisdom from the Dalai Lama this week. The evergreen screen talents seemed thrilled to meet up greeting each other warmly before engaging in an intense conversation, no doubt, inspired by the Tibetan leader's address. 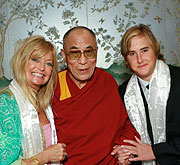 << Goldie and her stepson Boston Russell appeared delighted by their personal encounter with the Tibetan leader
Photo: © Rex

Goldie turned the lunch into a family affair, being accompanied by her 26-year-old stepson Boston - her partner Kurt Russell's child from a previous relationship. Also among the throng of Tinseltown executives and luminaries were Robert Downey Junior and Laurence Fishburne.

Speaking in English and with the help of a translator at times, the Dalai Lama urged his audience to consider making a biopic on the life of Buddha. Hollywood has the power to affect the world through cinema and spread compassion, His Holiness told them. "From Buddha's life story, maybe you'll get inspiration. Our intention is not the propagation of Buddhism, but helping the world."

After the lunch Sharon hosted a screening of the film Milarepa for another holy man, Lama Neten Chokling. A long-time film buff, the Bhutanese teacher lives in an Indian monastery, but was moved to make a movie about a Tibetan sorcerer, who turns his back on magic to become a Buddhist.