Buddhist center stupa called one of a kind'

Mount Shasta, CA (USA) -- Tara's Refuge Buddhist Center in Mount Shasta has added a new stupa that Refuge facilitator John Cashman says is one of a kind in the world. 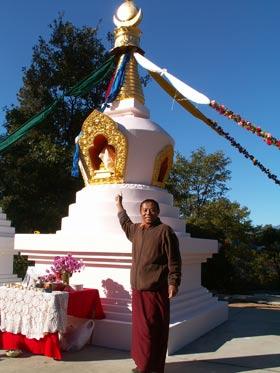 << Gochken Tulka in front of the new stupa at Tara’s Refuge Buddhist Center in Mount Shasta. “It’s purpose is to plant the seeds of awakening,” said Refuge facilitator John Cashman.

“It is the only female designated stupa in the world,” Cashman said.

A stupa, Cashman explained, is the “representation of the body, mind and speech of the Buddha.”

“Especially the mind of enlightenment,” he said. “A stupa has specific proportions that inspire people to be awake. It's a generator for positive energy that is said to have influence for hundreds of miles around.”

The stupa was built by monks from Nepal and consecrated by Gochken Tulka, who, Cashman said, is one of the only people in the western world qualified to to do such a consecration.

“He's only one of five in the world who does what he does,” Cashman said.

“Making offerings of candles and incense, and prostration can have tremendous benefit,” Cashman said.

Cashman said he intends to open the Center up to the public twice a year so citizens can experience the stupa.

“It's purpose is to plant the seeds of awakening,” Cashman said. “I was motivated to build the stupa to bring benefit for the community and raise health and longevity.”