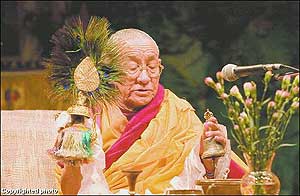 << Tibetan Buddhist monks from the Gaden Shartse monastery in southern India have been gathering for the past week at St. Joseph's Cultural Center in Grass Valley for a variety of spiritual events. Monk Geshe Lobsang Sonam conducts the opening ceremony of the Mandala of Buddha Manjushri, or Wisdom Buddha, recently.
Photo by John Hart

At the further end of the hall, a young monk draped in maroon bent over a wide, blue board, working assiduously on a pattern of bright colored sand. His metal working tool made a low scraping sound as soft powdered sand drizzled on the intricate sacred design.

Monks from Gaden Shartse Monastery in south India have been visiting western Nevada County for the past six years. They're back again - visiting schools, teaching their religion, sharing their culture and raising awareness about the political situation in Tibet.

China invaded Tibet in 1950, forcing the Dalai Lama, the religious and temporal leader of the Tibet, to seek asylum in India with thousands of Tibetans. Since then, people all around the world have offered support to the exiled leader.

In Nevada County, members of the Sierra Friends of Tibet help the cause of Tibet hosting the monks who've been visiting the area regularly.

"There are two main objectives to our visit," said Tenzin Dhondup, 29, correspondent secretary of Gaden Shartse Monastery. "First, we want to share our culture with the people. Second, we want to raise funds for the monastery. We don't have a particular aim; we just go by whatever donation we get."

The proceeds from the trip will fund housing, food, medical and educational facilities at Gaden Shartse, which is home to about 1,600 students, teachers, scholars and practitioners of Tibetan Buddhism.

"We want to preserve our culture and Buddhism," Dhondup said. "The Chinese government is trying to erase Tibetan culture and language because all of Tibetan Buddhism is based on language. Tibetans today have less opportunity to learn their own language. They face objections if they do spiritual practices. They're taken political prisoners for keeping pictures of Dalai Lama in their houses."

The present group of visitors from the monastery consists of seven monks and the correspondent secretary. They've toured Mexico, Costa Rica, Panama and several U.S. cities before coming to Nevada County.

"Many Americans want internal peace," Dhondup said. "But most of the time, they are involved with their job, their relationships, and they think they don't have time for spiritual practices.

The monks are giving a number of talks on Buddhist philosophy. There will be a lecture on death and rebirth today at St. Joseph's Center at 10 a.m. On Wednesday, there's another talk on the preciousness of human rebirth, and Friday the monks will explain the significance of the Manjushri sand mandala - the sacred pattern - that's being created at St. Joseph's Hall.

The Manjushri mandala helps awaken spiritual knowledge, said 17-year-old Dawa Jhangpo Lama, who's been working on the mandala since Jan. 27, four to five hours a day.

Nevada County reminded him of his native country, Nepal, Jhangpo said, with a faraway look in his eyes.

"They (the monks) are a role model for everyone," said Sara Conner, member of Sierra Friends of Tibet. "They are kind, nonjudgmental, not trying to convert you, just trying to teach you how to love and have compassion.

"It's a wonderful feeling. I can totally empathize with what they say."