At An Lac Mission, Vietnamese Buddhists and practitioners of all faiths find community

Ventura County, CA (USA) -- It is Sunday morning at the An Lac Mission in east Ventura. A monk in an orange robe kneels before a massive statue of the Amitabha Buddha, the central deity of the Pure Land branch of Mahayana Buddhism. 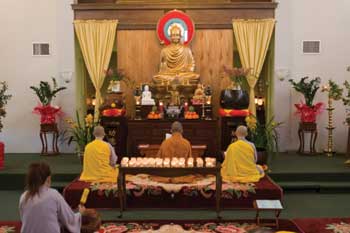 << Photo by Jacob K. Cunningham / Brooks Institute of Photography
A monk and two nuns face the Amitabha Buddha at An Lac Mission.

He is flanked by two nuns dressed in yellow. One bangs out a steady sixteenth-note pulse on a metal pot, while the others lead a droning, monotonic incantation. Behind them, six women, mostly elderly, sit on rugs of purple floral print, in front of a table adorned with 49 candles, hands clasped at their chests, reading the hymn from a book positioned on a wooden lectern.

Over the course of the hour-long service, more people enter the room: a man with holes in the heels of both his socks, a little girl tugging at her grandmother’s arm, more elderly women wearing lavender shawls. All are Vietnamese. Eventually, the chorus grows to two dozen; the chant becomes a loud, hypnotic hum, like the buzz of an amplified beehive.

United by a common faith

Then five immigrants, most of whom came to the United States just before the fall of Saigon, decided to fill the gap. They started An Lac not only to give themselves a place to pray, but to give shelter to a culture exiled by war.

“When Vietnamese Buddhists left Vietnam, leaving their own country, their birthplace and everything that they loved, all they had was Buddhism. No matter if it was Zen or Pure Land, under the flag of the Buddha, they united again,” says Sutadhara Tapovanaye, director of the Ventura Buddhist Study Center at An Lac. A colleague of the Venerable Thich Thong Hai, a Hawaii-based senior monk who helped found the temple, Tapovanaye is Sri Lankan and a student of the Theravada school of Buddhism.

Despite representing a different tradition, he has felt nothing but welcomed since he came to the temple. One of the main tenets of Mahayana is the concept of transcendental immanence, that all beings possess the ability to become a Buddha.

As such, An Lac rejects no one, regardless of ethnicity or faith. “This group is not tightly connected with the thought that this is the right form of Buddhism. This group is always respecting all the Buddhist traditions. And also, any other practice of religion is welcome.”

It took the congregation four years to find a stable home. Originally, the temple was simply the two-bedroom apartment in Oxnard where co-founder Nghi Dang lived with his wife, Ailien. After their neighbors complained about the noise, they relocated to a four-bedroom house near the beach. But the problems remained. “The police would stop by every Saturday and Sunday. We’d be inside and the police would be outside, asking us to stop,” Nghi says. “That’s why we kept thinking, ‘What can we do?’ ”

Finally, in 2004, they discovered the building on the corner of Saticoy Avenue and Darling Road. Previously a Christian church, the place was large and expensive. But the group knew if it was going to be open to all the county’s practicing Buddhists, the temple had to be big enough to support them. They took out a loan — which they are still paying back — and bought the property, painting it burnt orange, installing a pair of marble tigers out front and converting the building into the only all-inclusive Buddhist center in Ventura County.

Beyond the temple walls

But An Lac is not intended to be merely a place of worship. In addition to the weekend prayer and meditation services, the temple also offers a Vietnamese language class, to preserve the heritage of their homeland for a younger generation that only knows what it’s like to live in America.

And their charity work isn’t just to pay off their debts and expand the temple, either. In 2005, following the destruction of the Asian tsunami, the group went to Sri Lanka to help rebuild parts of the temples that were destroyed and donate Buddhist books and sewing machines to victims. On the wall in Tapovanaye’s office — a space at the back of the main hall — hangs a framed photo of Thich Thong Hai meeting with Sri Lankan President Mahinda Rajapaksa. It is a confirmation of the message posted near the temple’s entrance: “All are welcome.”

“When they came to this country, they worked very hard and have become very successful,” Tapovanaye says of An Lac’s founders. “They have decided, ‘We don’t want to enjoy these things by ourselves; we want to share with other people.’ That’s why they have started this temple. That’s what I have seen, even though they don’t verbalize it.”