Seattle, WA (USA) -- A beloved piece of art that was stolen from outside a Seattle yoga studio has been found. The Tibetan prayer wheel was found wrapped in a pair of plastic garbage bags, still in good shape. 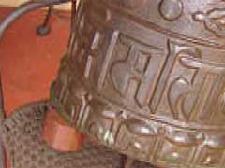 << Tibetan prayer wheels are devices for spreading spiritual blessings and well being.

Last week, a thief ripped the 30-pound, handmade drum from its post at the Planet Earth Yoga Center in Fremont.

Many thought it might be because it's made of copper, a metal that's become a very hot commodity.

The owners are going to put the prayer wheel back up in its original location, but with a stronger post.