San Jose Marine gets discharge for being conscientious objector

SAN JOSE, Calif. (USA) -- A federal judge in San Jose has taken the unusual step of ordering the Marine Corps to grant a reservist's request for a discharge as a conscientious objector. 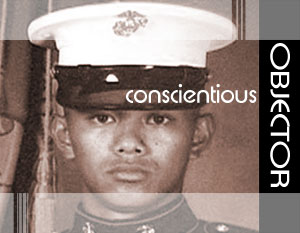 Lance Cpl. Robert Zabala, 23, said he joined the Marines as part of a family tradition of military service. But he said he was shocked during boot camp here to find such a strong emphasis on killing.

According to court documents, Zabala said he was appalled by the "blood lust" of one officer and broke into tears when shown pictures of dead Iraqis. He said his informal study of Buddhism led him to a belief in the "sanctity of life."

Officers of his reserve regiment who initially reviewed his application, filed in June 2004, recommended that he be given a discharge. But a general turned down the application on grounds that Zabala's objection to war was not the product of religious devotion.

One officer, according to court papers, thought Zabala might be seeking a discharge to avoid going to Iraq.

Zabala, a San Jose resident, had enlisted in the Marine Corps Reserve for eight years in 2002 and went to boot camp in 2003, but had not been deployed.

U.S. District Judge James Ware, in a decision handed down Friday, ordered the Marine Corps to discharge Zabala within 15 days.

Ware, who served 13 years in the Army Reserve, said he was convinced of Zabala's sincerity when the young man said he had struggled to "reconcile the demands of duty with the demands of conscience."

A UC Santa Cruz graduate now working as a paralegal, Zabala said he hopes the judge's decision encourages other service personnel who consider themselves conscientious objectors.

"Hopefully, this will help other Marines out there who feel the same way as I do but don't know how to articulate it," he said in a telephone interview.

While the case was in federal court, Zabala did volunteer work for the Santa Cruz Resource Center for Nonviolence, which encourages youths to resist the entreaties of military recruiters.

"When sincere objectors to war won't fight, the military has got to follow the law and release them," said Collier, who is part of the San Francisco-based Military Law Task Force. The group supports military personnel seeking conscientious objector discharges or facing charges for refusing to deploy to Iraq.

Marine Corps officials and federal prosecutors who represented the corps in the case had no comment.

From 2000 to mid-2005, 77 Marines filed for conscientious objector status. Applications were approved in 36 cases.