Hanamatsuri serves as a tradition for some

Vista, CA (USA) -- People of all ages and backgrounds gathered at white picnic tables in the parking lot of the Vista Buddhist Temple yesterday to celebrate birthdays. 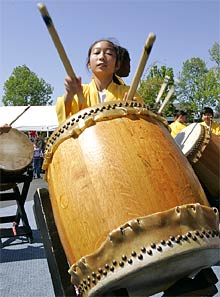 “You might say this weekend is a big birthday party,” said the Rev. Lee Rosenthal, a Buddhist priest who is resident minister at the temple. “We are all born in this world together.”

Gautama Siddhartha is said to have been born in a garden in India about 2,570 years ago, as sweet, spring rain fell and flowers bloomed. His followers later gave him the name Buddha, which means enlightened one. Today, Buddhism has about 376 million followers worldwide, according to Adherents.com, which collects demographic information on religions.

The annual celebration of Buddha's birth in April is called hanamatsuri, which means flower festival.

“It's a joyous time to see friends and enjoy life,” said June York, 50, a middle-school art teacher who lives in Carlsbad.

York was selling flowers and plants at the hanamatsuri yesterday. Wearing an apron with pictures of strawberries on it, she examined the cream and purple Cymbidium Orchids. They're her favorite type of flower because the blooms last for weeks.

It includes a variety of performances, from drumming to dancing, as well as discussions and arts and crafts. Japanese food is also for sale, including taikoyaki, little pastries with sweet beans inside.

“We stuff ourselves senseless,” said Fran Shader, 47, whose family reunites at the festival every year.

Shader sat at a picnic table, covered with Styrofoam bowls of cream-cheese filled wontons and teriyaki dishes, with her mother, two sons, two daughters and their children, among other family members. One of her daughters, Jasmine Couillard, came from Chandler, Ariz. And Couillard's mother-in-law, Gloria Sandell, 70, came all the way from Silverton, Colo.

Every year, they sit around one of the tables and talk, mostly about food, while their children play games at the booths. For their family, it's all about the tradition.

For Lani Altar, a retired school principal, and her husband, Raymond, a retired engineer, both in their 80s, the festival brings back memories of their days in Oahu, Hawaii, where they lived on a Dole Pineapple plantation. They moved to California in 1962.

“It has a resonance to it, a language of its own,” she said.