Center events on Tibetan Buddhism are part of an effort to create a UCLA chair in the field. On May 23, a high-ranking Buddhist abbot and a U of Michigan professor will read the poetry of a modern Tibetan monk in the original language and in English translation.

Berkeley, CA (USA) -- A quick search of UCLA's library collections returns 472 entries of Tibetan language texts. The problem is that no one at UCLA is devoted to studying them. 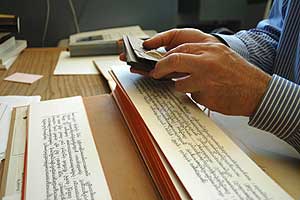 "The only area that we really don't cover right now is Tibet," says UCLA Center for Buddhist Studies Director Robert Buswell, a scholar of the religious tradition in Korea.

Home to four professors and looking to hire more, UCLA has the largest faculty for Buddhist studies in the Western world and the largest U.S. enrollments in courses on Buddhism. Two UCLA art historians specialize in Buddhism, and faculty members from several other departments have strong interests.

On Apr. 17, 2007, the Center held the first in a series of public events to raise awareness about its fundraising initiative to create a chair in Tibetan Buddhist Studies at UCLA. The speaker was Khen Rinpoche Lobzang Tsetan, recently named Abbot of India's Tashi Lhunpo Monastery by the Dalai Lama. As a teen he crossed the Himalayas from his village in India to study at Tashi Lhunpo Monastery in Shigatse, Tibet, before the current period of Chinese rule. At the event, Khen Rinpoche explained how "Tibetan culture is really preserved in the monastery," a religious institution that is also part university and part trade school, for admittedly diminishing numbers of men.

Shayne Clarke, who received his Ph.D. from UCLA in 2006 and is now an assistant professor of religious studies at Canada's McMaster University, says by telephone that he would not have been able to finish his dissertation on monastic law were it not for the classical Tibetan library collection at UCLA, which he helped to catalogue. He says there is more work to be done on the collection.

"It's a real shame that there's nobody there to use it," he says. "It's a very important collection."

'To Live in the World' 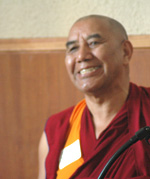 The texts that Silk uses, he explains by email, "often no longer exist in Indian languages, only in Tibetan (and Chinese) translations." It's a bit like studying classical European literature preserved only in Arabic—that is, not the same thing as being an Arabist.

Clarke says that it is very rare for a university to house complete and multiple editions of the Tibetan Buddhist canon, including indigenous Tibetan texts, rather than texts translated from Sanskrit.

The UCLA collection includes four separate editions of the voluminous Tibetan Buddhist canon, according to Buswell. It includes reprints of handwritten copies of manuscripts, some created in the twentieth century, on loose, long rectangular pages. These transcriptions mimic the shape and feel of thirteenth- and fourteenth-century originals drawn on palm leaves.

The collection largely came from Ensho Ashikaga, who helped found Asian Studies at UCLA in 1948. Ashikaga was a scholar of Japanese and Tibetan Buddhism and donated to the library his collection of Tibetan material, now housed mostly in the Young Research Library and the Southern Regional Library Facility (SRLF).

To add to Ashikaga's collection, UCLA became one of only six libraries in the country to order a complete, 120-volume set of the Tibetan Buddhist canonical texts, explains East Asian Studies librarian Catherine Lee.

Creating a chair in Tibetan studies is a very important and overdue step for UCLA, say both Buswell and Clarke. Such a position would not only promote understanding of a minority culture in China, but would allow students and faculty to appreciate contributions that Tibetans have made to the understanding of the human condition.

Buswell, himself a former monk, says that this particular tradition carries with it "a profound understanding of what it means to be human, to live in the world."

At the April 17 event, Khen Rinpoche argued that the Tibetan monastery is the source of the religion's richest tradition. He concluded by expressing support for a UCLA Tibetan chair as a means of bringing peace. ("Violence is never ever going to bring back to you peace," he said in response to an earlier question. "The Chinese people are not our enemies. They are all sentient beings.")

And a great teacher of Tibetan Buddhism can bring other benefits, Khen Rinpoche said.

"Those students will have a very good opportunity to reach enlightenment."