Monterey, CA (USA) -- For a moment on Sunday, the only sound was the sizzle of tempura in the fryer. The gentle scents of incense, teriyaki sauce and fresh flowers wafted in the afternoon air. 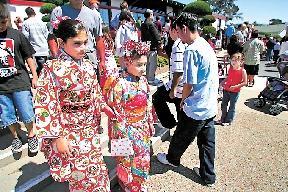 << Samantha Io, left, and Taylor Guy, both of Watsonville, walk into the rear courtyard dressed in traditional Japanese garb at the Buddhist temple in Seaside on Sunday during the 61st Obon Festival. (DAVID ROYAL/The Herald)

That was after the roar of Taiko drums pounded across the normally serene grounds of the Monterey Peninsula Buddhist Temple in Seaside.

It was the temple's 61st Obon Festival, which in the Shin Buddhist tradition of Japan is an annual celebration that honors ancestors and especially those who recently passed away.

The heroic volunteers who prepared enough Japanese food to feed hundreds are called the Fujinkai, said Andy Yoshiyama, 62, of Seaside, and the festival's chairman. "Those are the ladies that prepare and cook all the food."

Last year, the food sold out in three hours, Yoshiyama said. This year, the Fujinkai, who have worked to plan the event since January, made sure there was plenty more, but "we're still selling out," Yoshiyama said.

"Our problem with the next generation is that they move on," he said, leaving the area for jobs, affordable housing and, in the process, sometimes forgetting their Japanese traditions.

But at least once a year, those traditions are brought back for Obon.

An opening ceremony at the Seaside festival featured a taiko performance and Japanese kendo sword exhibition. Other events included flower-arranging by the Ohara School of Ikebana, a bonsai display, an aikido exhibition and the traditional Obon dance. Booths inside and out of the temple grounds offered food, books and Japanese clothing and art to an estimated several thousand who attended.

Yoshiyama said he hasn't attended all of the temple's 61 Obon festivals, but he comes close.

Born in Salinas, Yoshiyama was later sent to the Preston, Ariz., internment camp for Japanese-Americans during World War II. After a stint in the Air Force, he moved back to Northern California for good.

The Monterey Buddhist Temple, he said, was first established in the early-1940s at the Japanese American Citizens League Hall on Adams Street in downtown Monterey. The congregation held an Obon observation in 1946, a year after the war ended.

"The first Obon festival was held there, in the street with dancers," Yoshiyama said. In the late 1950s or early 60s, the event moved to the Monterey Fairgrounds, where Yoshiyama got involved. After the Seaside temple was inaugurated in 1965, the festival moved into the building's parking lot, where it's been held ever since.

The Seaside temple is part of a group called Buddhist Churches of America that practice Shin Buddhism, first brought to San Francisco from Japan in 1899. Other temples in the group are in Salinas and Watsonville, where Obon festivals will also be held in coming weeks.

During World War II, as West Coast Japanese-Americans were moved across the country to internment camps, the Shin Buddhist temples, which today number more than 100 in the U.S., also spread.

In Japan, Obon is considered a major religious holiday, clogging the nations's highways as families leave cities in the summer to take part in hometown festivities.

Traditional Obon observers hang lanterns in front of their houses to guide their ancestors. It is a time when families visit the gravesites of departed relatives and offer food for the spirits.

"The Chinese Feast of Lanterns is based on Obon," said temple member Larry Oda, who is also the national president of the Japanese American Citizens League.

Oda grew up in a house on Foam Street in Monterey's Cannery Row, and said his family has been in the area for 101 years. His grandfather, he said, built the cannery that is now part of the Monterey Bay Aquarium's structure.

In the U.S., he said, "Obon has turned into more of a cultural affair, reaching out to the community," whereas the event has kept a more religious significance in Japan.

But that doesn't mean the traditional meaning of Obon is lost on the Peninsula temple's members.

The temple holds a monthly service for all who passed away that month, in addition to its annual Obon service, where everyone who died that year is remembered. That service will be held at the temple next Sunday at 2:30 p.m., Oda said.

And at home, Buddhist families still keep family altars where the dead are honored.

When Buddhists die, Oda said, they're given a Buddhist name if they weren't already baptized with one.

That name is placed in front of the altar, with a candle placed on one side and flowers on the other, he said.

"They also put a small amount of rice or fruit to share what you have with them," he said. "You say a prayer, then when the candle goes out on its own, then you eat the rice."

As Obon draws to a close, he said, some observers in Japan still place floating lanterns in rivers or the sea, letting the light guide their loved ones safely back to the spirit world.