San Francisco, CA (USA) -- Sacred relics of Buddhist masters and saints, or Sariras, were on display at Fremont's Willits Center this past weekend. Local residents had a rare opportunity to view the precious collections for free. 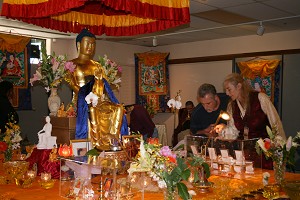 The Sariras are kept in golden lotus flower shaped containers surrounding a golden Maitreya Buddha statue. Throughout the day, a steady flow of visitors came to pay respect to the enlightened, to feel the curing energy, or to enjoy the loving energy.

"It's peaceful," said Sandra Cabrera, a Fremont resident and an immigrant from Mexico. "It's relaxing and I can feel the positive energy." She came with her parents and brother.

According to Buddhist tradition, the Buddha and Buddhist saints were able to focus their energy to create Sariras of various colors in their bodies prior to giving up their bodies. These pearl- or crystal-like beads contain the essence of a cultivator's purity and allow people to receive blessings.

The rare collection of Sariras came from 16 Buddhist masters and saints, including Buddha Shakyamuni, who enlightened under a Bodhi tree in Bodhgaya, and Kasyapa Buddha, who preceded Shakyamuni and is better known as the "historical Buddha." Others included the Venerable Maudgalyayana, Nagarjuna, and Milarepa, etc.

Some of the Sariras were salvaged from statues in Tibet where they had been enshrined for thousands of years before the Communist occupation in 1959. Other relics were donated by museums and monasteries. They will travel the world until they are placed in the 500-foot Maitreya Buddha statue that's being built in Kushinagar in northern India.

Maitreya comes from the Sanskrit word "maitri" meaning "love." Maitreya Buddha is sometimes called the Laughing Buddha and is usually portrayed as having a large belly. According to the Buddhist scriptures, Maitreya Buddha will be the next Buddha to descend to the world to spread his teachings.

"The reason we display them is because we want people to receive blessings from the holy objects," said Victoria Ewart, the relic tour director. "We all want to be happy. One way to generate happiness is to get into contact with holy objects."

The relics display will tour several cities in California and Nevada until mid-August. The next stop will be Irvine, California from July 13-15. After that, the tour will visit Canada, the Midwest, and then the East Coast.