Atomic bomb survivors pray and receive honors from Japan as they recall the loss of loved ones 62 years ago.

Sacramento, CA (USA) -- Survivors of the atomic bomb that hit Hiroshima 62 years ago gathered Sunday in Sacramento to remember a day too hard to forget. 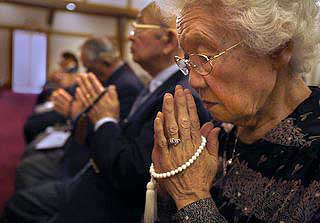 << Tokiko Okano, 86, a survivor of the Hiroshima atomic bomb, prays at a Buddhist commemoration in Sacramento of the wartime event. Sacramento Bee/Bryan Patrick

On the morning of Aug. 6, 1945, Tokiko Okano was outside her home in Hiroshima during World War II when United States air forces dropped a nuclear weapon on the city.

Her husband, Hiroyoshi Tsukwaki -- a soldier in the Japanese army -- was at work.

"He didn't get burned, but I could see his bones poking through his back," Okano said of finding her husband in the rubble.

Okano's husband died, along with her brother, who was severely burned, and an estimated 140,000 other people. Survivors in Hiroshima roamed the streets with singed hair and skin peeling from their bodies, Okano said. Shocked by the devastation, Okano said she could not speak for several months.

"I hope this never happens again," said Okano, 86, who now lives in Sacramento.

She recalled the events while sitting in the chapel at Buddhist Church of Sacramento Betsuin. A memorial service was held there Sunday to commemorate Japanese Americans, age 80 and older, who survived the nuclear bombing. Yuzan Fujita, governor of Hiroshima prefecture, sent special certificates to Okano and other Sacramento-area survivors Alfred Dote, Isamu Kobata and Satsuki Yamamoto.

It was a somber ceremony, but one marked by hope for peace. About 100 people at the Buddhist ceremony chanted the three Sacred Vows of Dharmakara's pledge, which includes becoming a great provider and saving the poor and suffering. Incense was offered to pay tribute to the deceased.

Takanori Okuda, consul of the San Francisco Japanese Consulate, talked about the difficulties faced by the Japanese after World War II and efforts to rebuild cities and their relationship with the United States.

"I believe it is our duty to make sure that the achievements of our predecessors are handed on to our children's generations," Okuda said. "As we gather today to pray for the peace of the departed souls, we also pledge our commitment to the Japanese American community and to the friendship between Japan and the United States."

But current events stifling peace were not forgotten. The Sept. 11 terrorist attacks and the following conflict in Iraq are frightening reminders of the devastation of war, the Rev. Bob Oshita said.

"Peace at this time may seem like an impossible dream," Oshita said, as he urged people to have more patience and tolerance for each other. "World peace begins with your peace of mind and forgiveness."

Organizers of the memorial service said there are about 30 survivors from Hiroshima living in the Sacramento area. Many shared stories about their survival and the relatives and friends they lost.

Masaaki Tademaru, 71, of Sacramento said he was fishing at a pond six miles outside of Hiroshima when he saw a "big shine in the sky" and a mushroom cloud hovering over the city. Tademaru rode his bicycle home, looking for his mother. Her body was never recovered, he said.